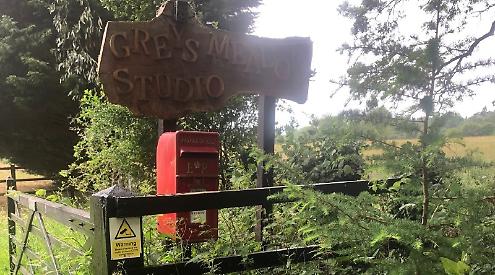 AN artist has been ordered to demolish his unlawful art studio.

Clive Hemsley has lost an appeal against an order to tear down the building on his land at Greys Meadow in Rotherfield Greys that he constructed without planning permission.

A planning inspector who heard the appeal at a public inquiry ruled that South Oxfordshire District Council was right to take enforcement action.

Mr Hemsley, of Hart Street, Henley had argued that the three-storey building was not much bigger than the one he had previously proposed, which was approved by the council in 2017.

But the inspector Justina Moss ruled the building caused “harm with regard to its effect on the character and appearance of the site and surrounding area”.

She said: “The development neither conserves nor enhances the landscape and scenic beauty.

“I have also concluded that the location of the development is unacceptable and that access to and from the site is such that this has a harmful effect on highway safety.”

Mr Hemsley was originally granted permission to convert a stable into an art studio with stores.

In 2017, he obtained consent to install a new structure. This was to be a wooden-clad building with an 81 sq m footprint, including 100 sq m of floor space with a 24 sq m basement.

But the actual building has a 102 sq m footprint with 237 sq m of floor space across three storeys, including a porch that is larger than agreed.

It comprises a lower-ground floor studio, which opens on to a sunken patio and tiered garden, and galleries on the two upper floors with a kitchen and three toilets.

The council was also unhappy about an earth mound from excavations, which has since been flattened, an additional storage building and a number of outdoor sculptures. A mailbox and sign were also installed without consent.

After the studio was completed, an enforcement investigation was launched by the council.

Officers concluded Mr Hemsley had “undertaken extensive hard landscaping works around the building and elsewhere on the site, which are contrary to the approved scheme of landscaping of the site”.

The council said the building was unlawful and must come down and then rejected a retrospective application. Mr Hemsley then appealed.

The inquiry heard that the building was in a slightly different position to that planned.

Council planning officer Robert Cramp said the increase in size and footprint of the development was “material” and “significant”.

He said: “It affects the character of the development itself and there are elements of the basement that can be seen from the outside of the property. Previous schemes that were approved were on the condition of personal use of the land and they did not set a precedent.” Mr Cramp said Mr Hemsley was trying to get permission for what had already been built when he had been told it was unacceptable.

He said: “Mr Hemsley concluded that the building he had permission for would not fulfil its purpose and would not satisfy the purposes he wanted to use it for.

“We made it clear from the start of the investigation that what was there couldn’t be approved.”

He said the building was “contrary to policy” and its position was “more harmful” to the countryside within the Chilterns Area of Outstanding Natural Beauty than the approved proposal.

Mr Cramp said: “It’s changing the character of the countryside and we call that ‘urbanising impact’. The totality of what has been done to this site has had an impact that is certainly more harmful.”

Juan Lopez, for the council, told the inspector: “The council had granted planning permission for an art studio for private use only.

“What was approved is significantly different from what has been constructed and where — on a majorly sensitive site.”

The council was also concerned about the studio being used for art classes or as a gallery or live-in residential accommodation, he said. Mr Hemsley denied he had any intention of living at the studio. Gavin Collett, for Mr Hemsley, told the inquiry that the council had not been clear in its enforcement notice.

He said: “When an individual receives an enforcement notice, it should tell them what they should do to remedy it.

“This council has made no reference to the planning permissions for the site and didn’t inform on the breach but made an allegation that the site was going to be used as a dwelling.

“Mr Hemsley made it clear he was very attached to the land. He is not going anywhere and wants to use this site for his painting. He is a dreamer and wants to do good and has altruistic desires but he has accepted that his desire couldn’t be done on that site.”

Mr Hemsley was disappointed by the inspector’s ruling and criticised the council.

He added: “How can the council justify the considerable waste of money, both on the lengthy public inquiry and subsequently requiring a perfectly good art studio to be repositioned by 13 metres, at a time when local authorities should be reducing costs?

“The studio itself is an amazing build and totally eco-friendly. The doors are from 150-year-old reclaimed Marsh Lock gates. It has triple glazing throughout, air-pump technology, underfloor heating, handmade reclaimed farm roof tiles and perfect light conditions for canvas painting.”

Mr Hemsley has had planning disputes previously. In 2017, he installed a 26ft “living wall” of plants to help tackle air pollution on the eastern wall of his home without permission.

He also attached two strings of LED lights to each face of Henley Bridge without permission. He removed these after a retrospective application was turned down.