Boy wins colouring competition ...and a game of golf for family 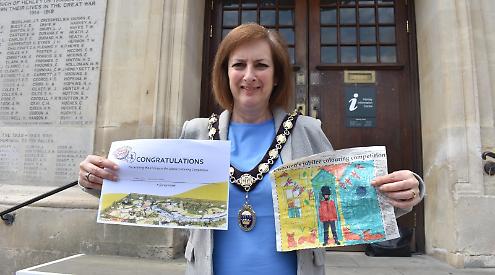 Maxwell Eaglesham was among the children who coloured in a special drawing of the Queen at Buckingham Palace and her corgis which was printed in the Henley Standard.

His prize was a family ticket to Henley Adventure Golf in Mill Meadows.

Maxwell’s mother Anna said: “He’s very pleased – he loves colouring and was very excited. I’m very proud of him because I know how hard he tries. He loves his arts and crafts — he can do it for hours and it keeps him busy.”

Mayor Michelle Thomas, who judged the competition, said: “I looked for two things — accuracy between the lines and the colours chosen. I also took age into consideration.

“I chose Maxwell because of the bright, jubilee colours used and the fact that the whole picture was coloured in. I’ve seen so much talent from the Henley children so it was a tough choice.”

The runners-up were Aurelia, 10, and Asia Rose Milligan, four.