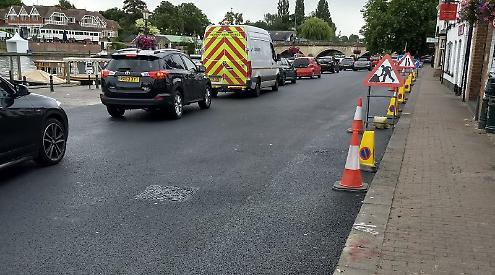 A MAJOR arterial road through Henley has been resurfaced.

Contractors from Milestone worked on the stretch from the mini roundabout near Rupert House School in Bell Street to the traffic lights in Riverside at the junction with Henley Bridge.

It included the length of New Street, which was strewn with potholes and had an uneven surface and worn road markings.

A bollard has been installed by the office of estate agents Savills on the corner of Bell Street and New Street to prevent vehicles from mounting the pavement.

The route is used daily as a cut-through to Henley Bridge by numerous heavy goods vehicle drivers and residents have complained that the lorries cause vibrations that damage their homes.

Residents and town councillors have campaigned for a weight limit on the bridge to reduce the number of HGVs but Oxfordshire County Council, the highways authority, is pursuing an 18-tonne zonal strategy for the wider Henley area instead.

Councillor Stefan Gawrysiak, who represents Henley on the town and county councils, said: “The road has been in a shocking state for a long while and we managed to secure this investment from the county council for this much-needed repair.

“It is a proper repair rather than a patch-up job because they have scraped off the surface and replaced the tarmacadeam and redone the white and yellow lines.

“It went bsolutely to plan and I think the traffic system worked well.

“The only road closure was during the night and all the noisy operations were being completed by 11pm.

“The work was absolutely needed from the residents’ point of view. I’ve stood in the living room of houses in New Street and felt the vibrations as the HGVs drive past so a smooth surface will improve this.

“I would just like to say thank-you to the New Street residents for being patient while we got it done and
for co-operating with the contractors by moving their cars so the job could be done efficiently and quickly.”

Cllr Gawrysiak said the bollard was “clever” but wouldn’t say how except that it is designed to be visible to ensure drivers use the width of the road rather than mount the pavement.

Meanwhile, he is continuing to put pressure on Duncan Enright, the county council’s cabinet member for travel and development strategy, to introduce a weight limit in Henley “as soon as possible”.

The council wants to pursue an 18-tonne limit in the wider area, having ditched an earlier plan to introduce weight restrictions in individual towns and villages.

This followed Councillor Enright’s decision to revoke a 7.5-tonne weight limit on Burford Bridge, which was identical to one proposed for Henley.

Some councillors, including Cllr Gawrysiak, challenged the decision but the council’s cabinet voted to uphold it.

But when Cllr Enright accepted an invitation from Cllr Gawrysiak to visit Henley and see the HGVs problem for himself he was said to be “horrified”.

Cllr Gawrysiak said: “I am told the 18-tonne zonal limit will be coming in soon and I am still pressing him on when this will be but a report will be coming out in October.”

The next roads in Henley scheduled for resurfacing are Albert Road, St Anne’s Close, Greys Hill and Fair Mile. Dates will be announced in due course.