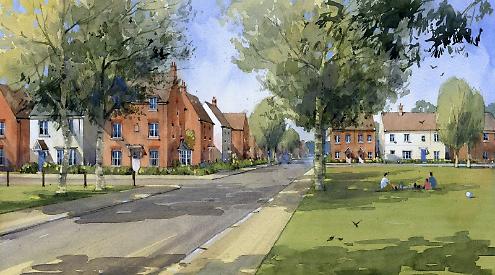 A COMMUNITY orchard due to be included in a new housing development near Shiplake has been scrapped.

Beechcroft Developments, which bought the site of the former Wyevale garden centre, off the A4155 Reading Road, in April last year, says this was on the advice of police.

The purchase came with planning permission for 40 houses and some commercial buildings granted by South Oxfordshire District Council in 2017.

When Beechcroft took over the land, which has become derelict following the closure of the centre more than 10 years ago, it wanted to increase the number of homes to 55.

But it changed its mind following criticism by residents and Shiplake and Harpsden parish councils saying this would be out of character with the area.

Now a revised planning statement has been submitted by HGH Consulting following public consultation on the plans.

Thames Valley Police said it was concerned about the lack of “surveillance” of the orchard and public open space so this has been removed and two open spaces are planned instead.

HGH says: “The scheme has been amended to reduce the amount of built form across the site and enhance the proposed amenity space.

“The parking layout on site has been revised to ensure off-street provision and remove the parking which surrounded the open space.

“The play area has been relocated to the centre of the open space, which is more than 5m from the nearest dwelling.The site has been amended to introduce a greater separation between the commercial and residential elements.

“The existing hedgerows on the southern boundary, which sit outside the application site, will be maintained to mitigate amenity impacts to the residential dwelling to the south.

“The revised layout responds to comments received during the consultation process and includes a significant setback from the main road, commensurate with other residential schemes in the area, notably Thames Farm.

“This setback and the screening provided by existing trees and planting will protect the amenity of future residents from noise associated with the road and also provide a green entrance to the site.

“Dwellings are accessed via a central street and the houses are set out in a perimeter-block style with large, spacious rear gardens and smaller front gardens which contribute to the street scene.

“Each apartment block is located with direct access on to the central street. A 5m planted landscape buffer has also been introduced on the northern and western boundaries to address comments raised by the landscape officer and to soften views of the development.”

David Bartholomew, who represents Shiplake on the district council, said: “I am generally supportive of these amended proposals but strongly object to the A4155 30mph limit being extended towards Henley and a ‘gateway’ feature being introduced.

“Extending the 30mph limit and creating a gateway feature would erode the desired separation between Harpsden and Shiplake and Henley and introduce unnecessary street furniture on a rural stretch of road.

“I would like to see permitted development rights removed from the commercial buildings, otherwise we might see a change-of-use application once it has been completed.

“It is important that the green areas within the development are protected to prevent further development at a later date.”

Public consultation on the revised plans will end on August 22.