A TEARFUL woman watched as a tree she had fought to protect was chopped down.

Patricia Campbell, 86, had campaigned to save the 200-year-old lime tree in the grounds of Townlands Hospital, near her home in York Road, Henley.

On Friday morning a team from Heritage Tree Services took about 45 minutes to chop down the tree to make way for the redevelopment of the hospital.

The land was needed to make way for an access road between York Road and Clarence Road while construction takes place and will eventually become a car park.

As she watched the trees branches being removed, Ms Campbell said it was like “being at the funeral of a much-loved friend”.

“I can hardly speak about it because Im so upset,” she said. “I feel absolutely gutted.

Ive lived in this road for 40 years and looked at that tree every day. Its a beautiful, iconic lime tree that has been here for 200 or so years. The massacre of this tree is a needless act of vandalism.”

Ms Campbell was among a group of residents who campaigned to save the tree in December 2012 and started a petition which gained 100 signatures.

“Weve done everything we can and Ive spent a lot of money getting advice and that sort of thing,” she said. Fellow campaigner Marilyn Shah, 61, of York Road, said: “It just seems to be a needless act of barbarity because its only making way for parking spaces.”

Mary Spargo, of Kings Close, added: “Its very sad that such a beautiful tree has been removed to make way for the building work.” 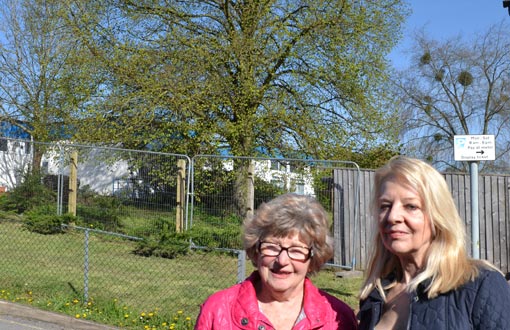 Vinci Construction had delivered newsletters to residents last week saying that a number of trees and shrubs at the site would be removed.

Project manager Mark Garner wrote: “The construction phase of the Townlands Community Hospital redevelopment will be undertaken in a manner that is sympathetic to the local community and residents.”

Meanwhile, the Friends of Townlands Hospital wants to save thousands of primroses growing at the hospital before demolition work begins.

Councillor Elizabeth Hodgkin is asking residents to help dig up the plants and then look after them until the redevelopment is completed, when they can be replanted.

The idea was the brainchild of Pam Phillips, another town councillor on the group, when she was mayor two years ago.

Anyone who would like to get involved should meet at the hospital at 10am next Saturday (April 26). Parking will be available on site. Volunteers are asked to bring 10 6in pots filled with compost, gloves and gardening forks.

Staff from the Hot Gossip coffee house in Friday Street will provide refreshments.