A NEW health centre is set to be built at Phyllis Court Club in Henley, despite opposition from neighbouring residents.

South Oxfordshire District Council has granted planning permission for the two-storey complex with a gym and swimming pool which will be built on the clubs existing visitor car park and tennis courts.

New floodlit tennis courts will be built next door and the car park will be extended.

Barry Hardman, chairman of the private members club, said: The permission allows for a low-profile, two-storey building with large, glazed areas to allow maximum use of natural light, together with a timber finish to blend into the surrounding woodland.

The facilities will include a 20m swimming pool, heat rooms (sauna, steam, jacuzzi), a gymnasium, aerobics suite, juice bar and well-appointed changing rooms, all located within the 920sqm floor area. It is anticipated that building work could commence towards the middle of next year with construction taking 14 months to complete.

He said that the centre would cost several million pounds to build and the club would ballot its 3,000 members on whether to go ahead with the project.

Mr Hardman said: We are looking to the future of the club and I believe the centre is the thing to attract new members and younger members.

Most of our members are in the older age bracket and we believe that with the working age going up and people needing to work longer we can attract some of them.

Some of the 57 residents of neighbouring Phyllis Court Drive objected to the development, claiming the complex would erode the quiet character of the cul-de-sac due to the increase in traffic and noise from people using the centre and it would give the area a more urban appearance.

They were also concerned about being disturbed by the floodlights.

Derek Shirley, 90, who lives in Phyllis Court Drive and has been a member of the club for more than 20 years, said he was amazed planning permission was granted.

It is disastrous, he said. The health centre would be behind us and there would be disturbance.

The visual impact on the area, which is an area of Outstanding Natural Beauty, would be impaired irreparably.

The planning consent, which was supported by Henley Town Council, has a number of conditions, including:
• The complex can only be used for leisure purposes by members of the club and not for any separate leisure or other purposes so not to undermine the vitality and viability of Henley town centre.
• A turning area and car parking spaces must be created in the curtilage of the site so that vehicles can enter, turn round and leave in a forward direction.
• There must be landscaping to include trees and shrubs, boundary treatment and the treatment of the access road and hard standings.
• There must be a construction management plan to protect nearby residents from noise and dust.

The hours of operation during construction will be restricted to 8am to 6pm Monday to Friday and 8am to 1pm on a Saturday. No work should take place on Sundays or public holidays without prior permission from the district council.

The operating hours of the health centre will be 6am to 10pm Monday to Friday and 8am to 7pm on Saturdays, Sundays and public holidays. The use of the floodlighting will be restricted to between 8am and 9pm. 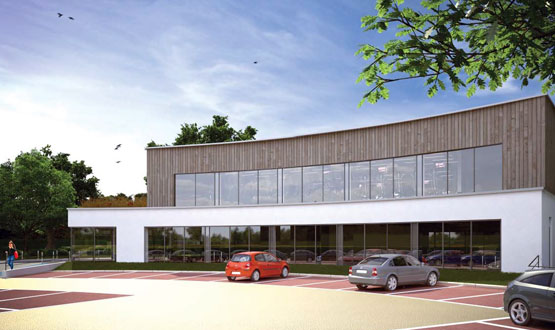