RECYCLING bins are set to be taken away because of illegal fly-tipping.

South Oxfordshire District Council plans to remove its mixed recycling banks across the area because of the nuisance and eyesores caused by illegal dumping. 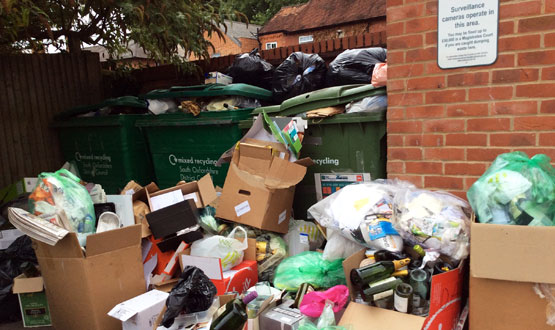 The council, which would save £20,000 a year with the move, said fly-tipping meant much of the recycling was contaminated with non-recyclables and had to be taken to landfill.

It said the banks were no longer needed because residents could recycle all items through their wheeled bins and put any extra out in clear bags or cardboard boxes on their usual collection day.

Councillor David Dodds, cabinet member for recycling and waste, said: Its a shame we have to consider this course of action  fly-tipping and misuse by a minority undoes the good work of most of our residents.

The council said the banks sites in Didcot and Watlington were removed as a trial and this did not result in any problems or complaints.

Cllr Dodds added: Our neighbours in the Vale removed theirs without causing an increase in fly-tipping elsewhere so it shouldnt cause us any problems. We look forward to hearing what our residents think.

Last month, the Henley Standard reported how 1.5 tonnes of household and commercial waste were left by recycling bins in the Kings Road car park, here. Town centre manager Peter McConnell said a corner of the car park had become a dumping ground.

A public consultation on the proposal will close on October 20. Comments can be left at www.southoxon.gov.uk/haveyoursay