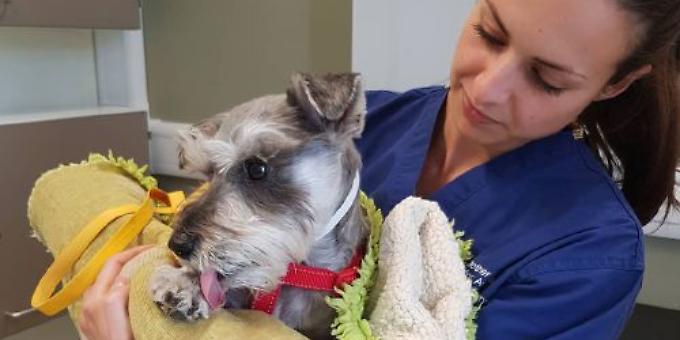 VICTORIA Carver was not having a good week.

It was May 4, 2018. She had just been made redundant only the day before and was chatting to former colleagues while on her computer in her second floor flat just off of the Fair Mile when she realised her flat was too quiet.

She says her heart froze as she recalled that one of her two windows in her bedroom was safe for her beloved dog Bertie and the other wasn’t.

Her eyes scanned the room but Bertie was gone. Victoria’s week had just got even worse.

Bertie lay motionless in a heavy pool of blood on the patio below. Victoria’s legs felt the heaviest they’ve ever been as she ran downstairs to him.

He was shallow-breathing while foaming at the mouth. In a panic, Victoria immediately called Henley Vets, who told her to wrap him in a blanket and bring him immediately to them, where they would be waiting.

Her beloved Bertie who was only three and a half years old, was bleeding profusely from an ear. A horrid thought crossed her mind and almost sent Victoria giddy, “All this blood must be from his brain?!”

These and countless other thoughts passed through her mind as she drove through the Henley traffic with the almost lifeless Bertie beside her.

As she pulled up, there was a team of nurses and vets waiting by the door.

“It was if I had met the Henley Vets intensive care team,” she recalls. “They were brilliant, but I was so traumatised and clearly no use to them, so they sent me home. However, within an hour I was called back as Henley Vets confirmed the injury was just too serious for them.”

They had stabilised him, but Bertie needed to be transferred to the Royal Veterinary College in Potters Bar for further and more extensive treatment.

Two vets travelled with Victoria and Bertie, who was by now connected to a number of beeping machines and strapped safely to a board as they made the critical journey by road to Hertfordshire. Again, another team were on standby and waiting. Victoria was advised to say her “goodbyes” and she says she was under no illusion that his prognosis was not good.

Quite simply, it was touch and go and Bertie’s life was hanging in the balance. It was going to be a long drive home.

All Victoria could do at this point was hope that he would make it and that just maybe her fitness routine — Victoria and Bertie used to go running together — would help him. It felt a slim hope.

Bertie made it through the first night and the second. But by day three, there were new worries — his neck was showing signs of fractures. These were in addition to skull fractures and of course, the considerable bleeding she’d witnessed from an ear. Still he held on.

Later, on the third day, perhaps a miracle happened, says Victoria. Bertie sat up. Then barked and then did a poo. (Every dog owner knows this can be indescribably significant.)

Although this was overwhelmingly uplifting for an understandably distressed Victoria, Bertie was not quite out of the woods just yet. Poor Bertie, although up and about, was walking as if he were “a little bit drunk”.

He was incredibly weak, but importantly, all of his organs were working. Furthermore, five days after the horrifying incident, Victoria was able to walk him around the RVC, albeit whilst he was still having to be held up in a weight-bearing sling.

Lady luck was turning for Bertie and Victoria and 10 days later she made another journey to Potters Bar. This time she was able to take the weak but improving Bertie home.

Now 18 months later he has returned to full health. “He can now recognise the doorbell and doesn’t have the head/neck tilt that he had,” says Victoria.

“He has also come off his drugs for seizures and I am back to work, although I won’t tell you what the bill was for him. Thank goodness I had insurance and the good fortune of Henley Vets up the road.”

Victoria is delighted to say that five-year-old Bertie has now been fully signed off from the vets.