Growers delighted to decorate No 10 tree 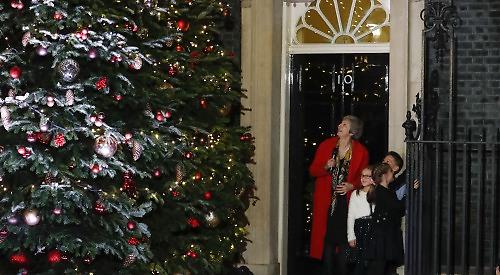 Jane Ingram spent about five hours affixing hundreds of baubles and lights to the tree at the London home of Prime Minister and Maidenhead MP Theresa May.

It was the second year running she had been asked to decorate the tree on behalf of the British Christmas Tree Growers Association. Mrs Ingram, who runs the Tree Barn with her husband Andrew, was joined by fellow grower Charlotte Gilbert, from Birmingham, as they decorated the tree with a red and gold colour scheme.

Each year, the tree outside No 10 is supplied by the winner of the association’s grower of the year award. This year’s tree winner was John Junor, of Farr North Christmas Trees in Inverness.

Mrs Ingram said many of this year’s decorations were re-used from last year and she added some new ones.

She said: “We supplied all the decorations free of charge because it’s an honour to do it. We were given a remit, which was traditional reds and golds and no enormous baubles.

“We managed to sneak in some cinnamons, chocolates and different shades of red and I also sprayed some pine cones gold.

“We refreshed some of the baubles and added some berries for a change.

“We have supplied the tree there three times, when we won the competition.

“We haven’t entered in a while but it’s jolly nice to be involved and maybe we will be asked to do it again.”

The pair were helped by a team on a cherry picker, who applies the decorations to the top of the tree.

Mrs Ingram said: “We were putting them up in the dark as it took a while to put the tree up.

“It’s a very tall and particularly bushy tree this year so it took a few more decorations.

“We snuck a little elf in the tree for children to find as well as another one on the star at the top.”

The tree has already had a lot of airtime after a turbulent few weeks for the Prime Minister over her Brexit deal and decision to delaying a vote on it by MPs.

Mrs Ingram said: “I was emailing someone on Wednesday saying the tree looks nice but it’s not being photographed for very happy reasons. I hope it brings a bit of cheer to the street.”

The Tree Barn has sold hundreds of trees this season, including more than 200 at country homes, hotels and town centres across the country. These include Castle Howard in York, Magdalen and New College at the University of Oxford, the Ritz and Savoy hotels in London and the US embassy.

Most of these were decorated by professional companies including WindowFlowers, of Burnham, which provides Henley’s summer hanging baskets in Henley each year.

The Tree Barn also supplied a 28ft Nordmann fir for Henley as well as others in Thame, Wallingford and Stokenchurch.

Mr Ingram said: “It’s quite fun driving round London and spotting all our trees!”