Swappers move inside to avoid rain at final event of year 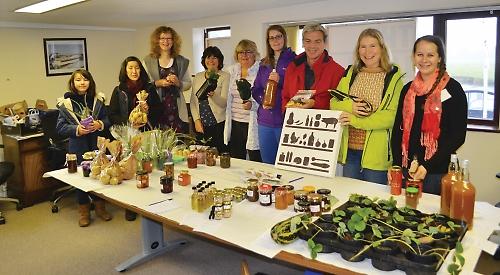 A FOOD swap event in Wargrave went ahead on Saturday despite rain.

The Apples for Eggs event, which is usually held outside the Local Larder farm shop at Val Wyatt Marine in Willow Lane, was moved inside.

Nine people attended the event and swapped goods including home-made jam and chutney, vegetables and cider without any money changing hands. Everything had to be worth the same as a box of six eggs.

There were also festive-themed gifts such as Christmas cards and hot chocolate snowmen.

Organiser Jessica Hayes said: “It was another good swap and there were a couple of new faces, which was nice to see. It was damp and drizzly so we were lucky that the Local Larder let us use their room upstairs, where we could stay warm and dry.”

The next food swap will be held at the marina in February or March.

The food swap is held at the Local Larder about four times a year. Mrs Hayes helped found the event in 2013 and took over from former organiser Suri Poulos earlier this year.

The shop, which opened in 2014, is run by Alison Hussey and sells locally produced food and drink.

In July the shop was named the best delicatessen in Berkshire in the Muddy Stilettos Awards.