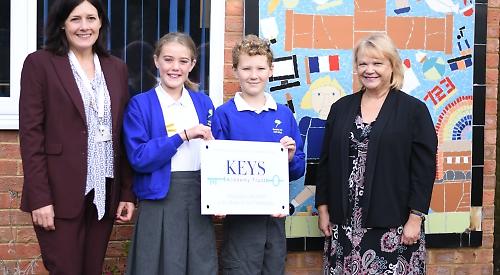 A SPECIAL assembly was held at Crazies Hill Primary School to celebrate its conversion into an academy.

The school welcomed Hester Wooller, chief executive of the Keys Academy Trust, who presented a plaque and spoke to the entire school during assembly. She asked the children what made the school special and told them about the trust.

The school was formerly under the control of Wokingham Borough Council as the local education authority.

Headteacher Phillipa Chan said: “So much hard work has gone into this conversion. We operate day-by-day as the same but our senior leadership team is already working on new ideas.”

The school started the new academic year as part of the academy with other schools including Earley St Peter’s primary, St Sebastian’s primary and St Nicholas primary in Wokingham and Sonning primary.

Being part of the trust means pupils will benefit from challenge days and staff receive shared safeguarding training.

The school, which was rated “good” at its last Ofsted inspection in 2016, was officially accepted by the trust in March after negotiations with the council, the Department for Education and the Oxford Diocesan Board of Education. Parents were consulted and welcomed the plan.

Mrs Wooller added: “The whole ethos of the academy is not adopting a standardised model but keeping the best aspect of each individual school in a supported environment.

“A small school is very attractive to families. Parents love it and there is a sense of belonging.”