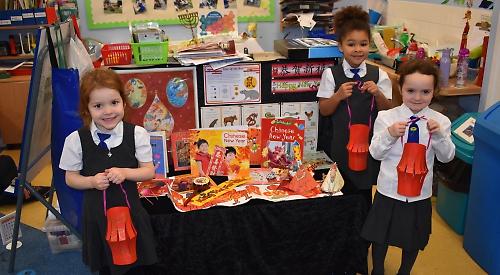 The children made Chinese lanterns and tried the language.

They were also served a lunch of sweet and sour chicken, or a vegetarian alternative of spring rolls, followed by mandarin-flavoured jelly.

Chinese New Year began on Saturday and 2020 is the year of the rat in the Chinese zodiac. People born this year are predicted to experience good fortune.

Headteacher Philippa Chan said the majority of students enjoyed the Chinese food. She said: “We have changed our caterers to Edwards & Ward and the quality of their food is really good so we thought we would give it a try.

“The younger children had the chicken in a different bowl to the side because they were not sure they would like it but they ended up loving it.”

The school also held a special assembly, where the children learned more about Chinese culture.

Mrs Chan said: “We are a small school and it’s not very diverse. We don’t have many different nationalities but we think it is very important to teach the children about different festivals from around the world. It is important to develop their understanding and tolerance of other cultures.

“We try to push ourselves academically and socially and we want the children to embrace different experiences.

“We made a Chinese dragon a couple of years ago as a whole school art project. We have been doing this for a few years now and every year it seems to build.”

Pupil Annabel Copeland, eight, ate her lunch and said: “I enjoyed the sauce and the chicken. I also liked the pineapple.”