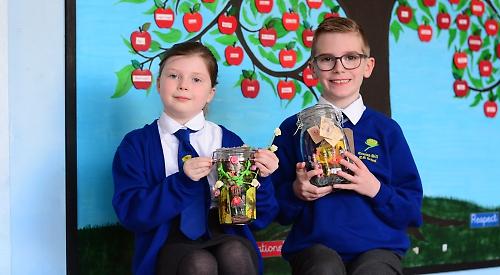 CHILDREN at Crazies Hill Primary School captured the essence of their favourite books in jars to mark World Book Day.

Ruth Burton, English co-ordinator, organised this year’s activites. She said: “We are trying to find different ways of celebrating World Book Day, because not everybody likes to dress up and it is nice for them to show their creativity.

“As a school we are trying to raise the profile of reading and remind them that it is important to read for pleasure.

“Every Monday we do 10 minutes of reading for fun in the morning and the teachers join in as well. We have been doing that since Christmas.”

The school also asked children to do “extreme reading” which involved having their picture taken in an unsual place while reading a book.

One was at the top of a climing frame and another had their photo taken while they were swimming.

Greyson Wagner in year four spent four hours working on his jar, which was themed on The Day The Crayons Quit.

He said: “I enjoyed doing the jar this year. Most of the costumes that my family have done are not from shops. We usually do them ourselves.”