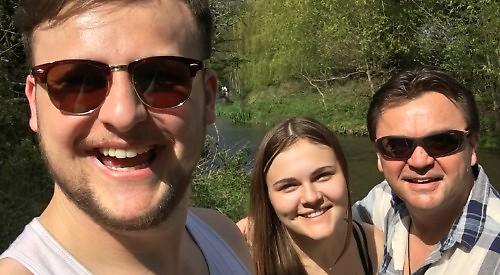 A YOUNG musician has written a song encouraging people to behave responsibly during the coronavirus pandemic.

Ellie Chapman, 22, wrote Stay at Home at her own home at the Horns pub in Crazies Hill, which is run by her father Richard.

She then produced a video as well with the help of brother Sam, 23, who is studying for a master’s degree in film directing. It has had more than 6,500 views on Facebook.

The film features Ellie playing piano in the pub’s bar and restaurant area, with clips to illustrate the impact of the virus. There are also brief clips of friends and family trying to adapt to life in lockdown.

Ellie, a kitchen and bathroom design consultant at Wickes in Winnersh, has been furloughed so had plenty of time to write the song — not that she needed it.

She said: “I was just sitting in bed and decided I was going to write a song. I finished in about 10 minutes.

“I have always been able to put pen to paper and write music. My family and friends are always amazed at how quickly I can write a song. It is not a talent that I show off very often but when I do I really enjoy it.”

She said she was “blown away” by the reaction online but says she has no plans to try make a living out of music.

“A career in music or acting is uncertain and I like to know how much I am getting paid each month,” said Ellie, who has previously performed at the Kenton Theatre in Henley and the Hexagon in Reading. “I am happy to stick to a nine-to-five job. If anything bigger comes from this then that would be great.”

Mr Chapman, 56, who worked in sales and marketing for about 30 years before realising his dream of running a pub just over a year ago, said: “A lot of people are critical of the younger generation so to have two children who have the morality to stay at home and say ‘thank you’ to the NHS is wonderful.

“We want to get a message of hope out there, but let’s also do our bit by staying at home and get this virus out of the way so we can get back to a normal life.”

The Horns has been shut since the Government ordered all non-essential businesses to close in March and Mr Chapman is worried about the future.

He said: “We have put lots of effort into getting it this far. We have had fantastic reviews from our customers and I’m sure they are missing us but it could take a long time to bounce back to the level it was at.

“Like all publicans at the moment, I am struggling with no income.”

Sam is studying at the Met Film School in London, which has also been forced to close because of the virus. However, he may be able to use the video for Stay at Home for his dissertation.