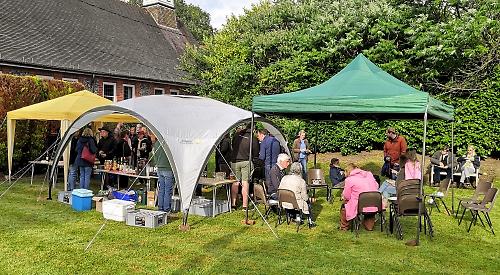 This was the first social gathering organised by Crazies Hill and Cockpole Green Residents’ Association since the start of the coronavirus pandemic in March last year.

It was held on the green outside the village hall in Crazies Hill.

There was heavy rain at times but the event carried on thanks to gazebos and tables inside the hall.

The event raised £700, which will be put towards maintaining the green.

Mr Smith said: “Although the main purpose of the evening is for friends and neighbours to get together and enjoy themselves, the event does make a profit.

“Despite the chosen date being in the middle of what should have been summer, the committee had an anxious week watching the weather forecast, with storms and heavy showers on the horizon.

“Undeterred, the decision was taken on the Friday morning to proceed. It was decided to go ahead with the bar outside but the food would be served inside.

“The prospect of salad leaves blowing across the lawn and burgers in soggy buns was not something we wished to experience.

“No sooner did the first guests arrive than the heavens opened but it takes more than a deluge to put off the hardy residents of Crazies Hill and Cockpole Green. Everyone stood under the gazebos and chatted to their friends and neighbours and then after an hour the sun came out and we were rewarded with the remainder of the evening being dry.

“It was clear that everyone was making the most of this social occasion and it was only the fact that it became dark so it was difficult to see our drinks that the party broke up.

“Not everyone went home though, as many went on to the Horns pub and continued the revelries until closing time.”