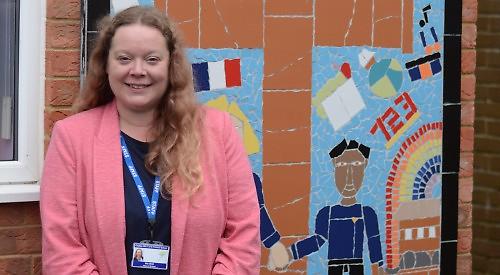 A TEACHER who has been at Crazies Hill Primary School for 16 years has become the new head.

Jo Shell has been part of the senior leadership team for all that time and worked under the previous headteacher Philippa Chan for five years.

She will continue to teach English and maths to years 5 and 6.

Mrs Shell, who is married with two children, said: “I feel very proud to be the head of school, which I have cared about deeply for 16 years.

“I feel an energy and an excitement in the air when I go into the playground and talk to the parents. There was certainly a lot of enthusiasm for the start of the new year.

“The senior leadership team was essentially Philippa and myself, so I was effectively her deputy head.

“Over the five years that I worked with her, it deepened my knowledge and understanding of the wider structure of a school. It’s not just about the classroom role but the leadership and management. When she decided she wanted to move on, I knew that it was time for me to step into that role.

“My role is slightly different to the one she had and instead of being the headteacher, I am head of school.

“The reason for that is I wanted to retain some of the teaching element and didn’t want to step away from the classroom completely.

“I feel the wealth of knowledge I’ve gained has prepared me to lead the school and move it forward.”

The school, which has 98 children, began the new academic year at the start of this month after introducing a mixture of online and face-to-face learning during the coronavirus pandemic.

Mrs Shell said one of her most important tasks would be to pull it back together. She said: “Everybody has risen to the challenge and developed a resilience. We’ve learned an awful lot and rather than forget that, we want to take the positives.

“The special qualities that the school has always had have been affected by covid and I think this new chapter is a chance for us to come together again.

“We can see the joy on the children’s faces and the way they are with each other.

“They are joyful at play time — we have the very youngest playing with the oldest and the school has always prided itself on being a close community.

“Now we are re-establishing those connections. We are developing well-rounded children who are thoughtful, caring and responsible but also resilient and confident.

“The staff want to be the best they can be, too.

“I’m looking forward to events like Harvest where we can bring the whole school together.

“The school productions for the last year have been videoed, so it would be wonderful to have a live audience again.” Mrs Shell’s husband Adrian is a development editor for the University College of Estate Management in Reading.

Their children Rosie and William both attended the primary dchool.

Rosie, now 18, is following in her mother’s footsteps as she is to start studying for a bachelor of education degree at Reading University while William, 16, has just begun an engineering diploma at Reading College.

Mrs Chan left at the end of the last academic year to take over as headteacher at Shinfield St Mary’s Junior School. She joined the school in September 2016 to replace Eileen Holmes, who retired after 11 years at the school.

Crazies Hill Primary School, which is rated “good” by Ofsted, became an academy two years ago and is part of the Keys Academy Trust.

An open morning for prospective parents in the early years and foundation stage will be held on Friday, October 15.