Villagers party into the night at special jubilee barbecue 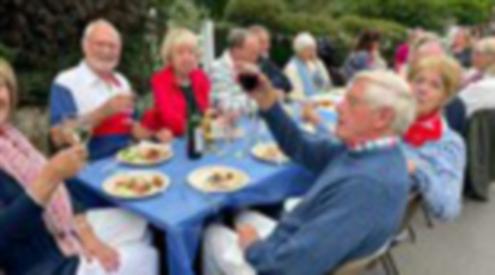 A BARBECUE party was held in Crazies Hill to celebrate the Queen’s platinum jubilee.

The event took place on the green outside the village hall and the theme was red, white and blue so the hall was decorated with Union flag bunting.

The barbecue is organised annually by the Crazies Hill & Cockpole Green Residents’ Association but this year coincided with the jubilee bank holiday weekend.

It was attended by about 180, more than double the usual total.

The first event of the day was a rounders match between Crazies Hill and Warren Row, with the latter being victorious.

The road from the village hall to the school playing fields was then closed and filled with tables and chairs brought out by residents for the street party.

Dave Smith, chairman of the association, had dyed his hair red, white and blue for the occasion and he welcomed everyone.

Phil Davies and Clare Donovan were on barbecue duty while Sue Robinson served the burgers and sausages.

In the evening, the road was
re-opened but some residents remained chatting on the lawn in front of the beer tent until almost midnight when they helped pack away the equipment before returning the next morning to complete the clean-up.

Mr Smith said: “All agreed it had been a wonderful afternoon and evening.

“It brought everyone together and was a fantastic community event and a fitting tribute to Her Majesty. Thank you to everyone who helped to make it such a success.”