Sprinter urges children to do their best 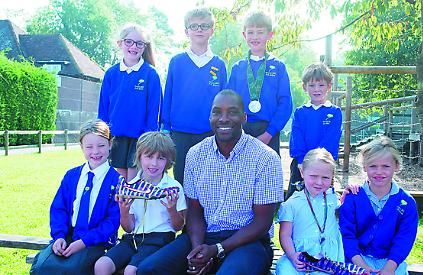 The athlete, who won silver with the Great Britain 4 x 400m relay team at the 1996 Atlanta Games, was promoting the Be The Best You Can Be campaign, which encourages young people to set life goals.

Richardson, 42, is one of dozens of public figures taking part in the nationwide programme, which was established after the 2012 London Olympics.

He talked to pupils about his athletics career and then visited individual classes so the children could tell him about their own dreams. He also showed them his medal and signed autographs.

Richardson said: “I’m here to help inspire and motivate the children, get them engaged with the programme and think about how they can reach their potential.The children did a beautiful job of listening to my story and asked some really good questions.”