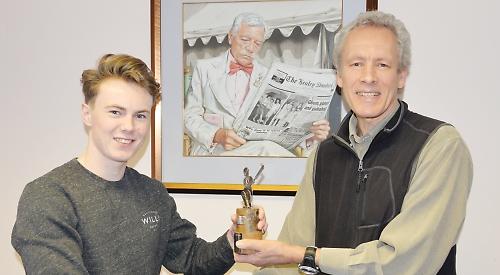 A BATSMAN from Sonning Common has won the Henley Standard’s Best of the Week award.

Nineteen-year-old Fergus Nutt picked up the John Searby Trophy at the Henley Standard offices where Tony Searby — son of the late John Searby who the trophy is named after — made the presentation on Monday.

The Best of the Week competition runs throughout the season and records the number of times a batsman scores more than 50 runs or a bowler takes five or more wickets in weekend matches.

Nutt, who plays for Peppard Stoke Row, recorded 19 entries last summer to secure the trophy as he hit four centuries and 15 half centuries in a season that saw him score 1,895 runs.

In the Berkshire League’s top division Nutt hit 747 runs at an average of 67.91. The prolific batsman’s best knock of the season was 135 not out in his side’s league win against Welford Park.

Nutt, who is studying sports science at Swansea University, was also Peppard Stoke Row’s top fielder where he was involved in 28 dismissals taking 23 catches and causing five run outs.

Last summer saw 496 entries in all, up 19 on the previous year’s total. In all there were 418 entries for batting and 78 for bowling with 82 centuries being recorded.

The best individual innings of the season was 186 scored by two players — M Singh of Checkendon against Whitchurch and J Easton of Kidmore End against RUASC. The best bowling performance was 8-16, again recorded by two players — Kidmore End’s A Ul-Wahab against Turville Park and R Birkett for Harpsden 2nds against The Lee 2nds.