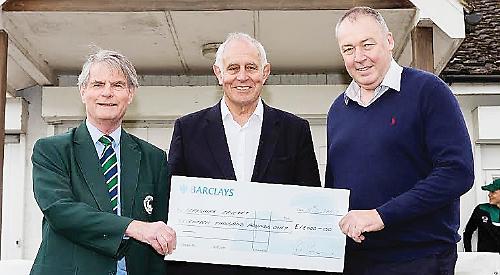 “They will both be a major boost to cricket in Berkshire,” said club chairman Neil Doody.

Berkshire will receive £85,000 spread over five years — by far the biggest sponsorship in the club’s long history.

The first cheque was handed to Doody by Summerleaze chairman Peter Prior before the Marlborough Cup tie with Wiltshire at North Maidenhead CC, where Prior is also the chairman.

Doody said: “We applaud Peter’s generosity. This quite exceptional sponsorship is a terrific boost as it will enable us to continue our progress on every front throughout the county.”

North Maidenhead will also host Berkshire matches at all levels, including the women’s first 11.

Doody continued: “It takes a lot of effort to organise sport and it requires good organisation to get players achieving their best, so I would like to recognise people who actually manage and coach sport. It is a big job and they should be given a big thank you for it.

“I wish Berkshire another successful season and hope they can finish up again as champions.”

As for Middlesex, it is the first time a first-class county has forged such links with a minor county club.

The main objective of the partnership is to ensure that young cricketers in Berkshire have a direct pathway leading to first-class cricket, while the Lord’s club will be able to extend the experience of their young players by integrating them into the Berkshire system.

Angus Fraser MBE, the managing director of cricket for Middlesex, was also present at the announcement, which was made before Berkshire’s Marlborough Cup win over Wiltshire on Sunday.

Fraser said: “For us to have a relationship with a minor county like Berkshire is really positive because it’s here that the schools seem to play more cricket. They have got a good youth system in place, which is really important for us and in the same way our young players will have the opportunity to come and play some high-class cricket within Berkshire.”

Mark Allum, Berkshire’s director of youth cricket, commented: “Both the sponsorship and the link with Middlesex are going to make a big difference for what we will be able to do.

“We have probably reached saturation point in what realistically we can expect to do within the county with the level of funding we already get from the ECB, so the money Peter has donated through Summerleaze is going to make a massive difference.

“The partnership with Middlesex will enable our youngsters to be involved in a professional pathway, whilst also giving us access to a first-class level of expertise on the coaching and development side.”

Allum added: “There is a lot of boys who have come up through our junior teams and that is a testament to what we are able to do. We have also been able to push players through to the first-class game.”

Summerleaze will have their name on players’ shirts at all levels, although Newbury Building Society will continue to take priority with the 2017 first team due to the sponsorship deal they have with the club.