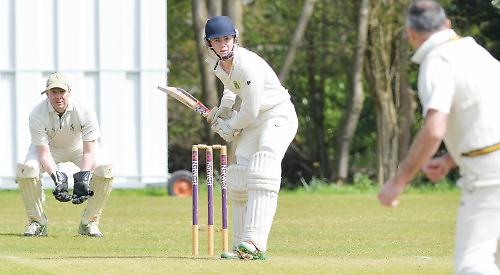 The hosts won the toss and Wynand Lamprecht and Fergus Nutt shared an opening stand of 70 on a good wicket before the former was caught at long off.

Nutt — who looked in imperious touch following his appearance for Swansea University in their Varsity match at the SWALEC Stadium recently — was stumped shortly after and when Paddy Hennessy was bowled for 10, the hosts had slipped to 122-3.

A 63-run stand between Richard Walker and Richard Ashton put Peppard Stoke Row back on top, and with Olly Nicholson and Dan Hayden hitting the ball to all parts late on, the hosts totalled a seemingly competitive 238-5 from their 40 overs.

Riaan Ackerman made an early breakthrough for the home side when he trapped Rhys Wheeler lbw and when he had David Rogers caught by Walker, the visitors were 32-2.

Captain Ben Barker smashed a rapid 41 before he was stumped by Michael Chard off the bowling of Lamprecht, and when Olly Nicholson bowled Dave Bushnell the game appeared in the balance with Wooburn 144-4.

However, Alex Barker made a match-winning century, and despite the best efforts of Nicholson and Hayden, Wooburn were able to creep over the line with 14 balls to spare.

Fergus Nutt hit the first PEPPARD STOKE ROW century of the season as the club’s Kites side beat WOODCOTE by 36 runs on Sunday.

The home side fell into early difficulty at 36-2, but an 83-run stand between Nutt and Richard Ashton redressed the balance. The latter was unfortunate to pick out long leg from a Steve Henderson bouncer and when Gerry Bacon edged the same bowler behind, Peppard Stoke Row were 125-4. Nutt reached his ton before retiring.

A collapse saw the home side fall from 190-4 to 210-9 in the face of some outstanding spin bowling by Ben Danks, and when Nutt returned to the crease he was trapped in front by Paul Knox as Peppard Stoke Row were dismissed for 210. The Woodcote reply was decimated by a good spell from U 16 Will Atkinson, who dismissed James Wheeler, Henderson and Knox during a spell of 3-25.

With Nutt bouncing out Woodcote’s 2016 batsman of the year Micky Molloy and Chris Proudfoot taking a stunner at gully to remove Ryan Lennard for 36, the
visitors were in trouble at
70-5.

Captain Ryan van Heerden looked in ominous touch as he passed 50, but with Satheech Elaganathan, Chris Humphreys and lastly Phil Duncan among the wickets, Woodcote were eventually dismissed for 174.

Matt Kimber continued his fine start to the season, but PEPPARD STOKE ROW MAHARAJAS were edged out by 23 runs in their game against SULHAMSTEAD on Sunday.

Kimber claimed 3-10 and with Rob Dyer, Matt Ravden, U16 George Lee and U14 Owen Simmons also among the wickets, Sully were restricted to 157-7 in their 35 overs.

The Maharajas found the going tough in the early stages, and despite fine efforts from Rob Simmons, U14 Owen Ravden – whose straight driven boundary was the shot of the day – and Allan May, they were only able to reach 133-9 in reply.