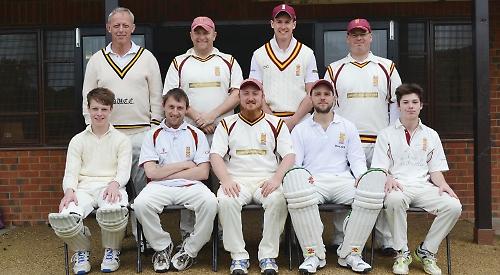 GORING played their first home game with the use of the newly refurbished Gardiner pavilion on Sunday against ASTONS.

The match was largely dominated by bowling on a tepid day which saw the Astons skipper win the toss and field first.

The home side’s openers could only manage four when they lost their first wicket, Baxter bowled by an inswinging delivery. The second wicket fell in quick succession, Monk being bowled.

Ollie Carrier and Don Norman settled things as they took Goring quickly into the 40s with some good counter attacking shots but this was short lived as Norman was run out by from a ball hit back to the bowler, which sparked a good five minutes for Saunders who claimed the wicket of Carrier next delivery.

This was to spark the downfall of Goring as Saunders went on to bowl Rhys Tong-Jones first ball. He had to wait until his next over before bowling the hat-trick taking delivery with which he succeeded in dismissing Goring skipper Adam Ellis to accomplish a fine feat.

Six wickets down, Goring were able to claw their way back, thanks in large to some good striking from Stuart Hedley and Will Brownlee setting Astons 106 for victory.

In reply Astons looked shaky after losing openers both lbw to Carrier and Kent. Good, tight and accurate bowling gave the impression the game could go to the wire, but when Harris came to the crease and top scored for the day with 52 not out hopes were dashed of a nail-biting finale.

The youngster, who had bowled a fine spell troubling many of the Goring batsmen, displayed an array of powerful hitting. Astons reached their required target with the loss of only five wickets.