Plested proves thorn in side for newly-promoted villagers 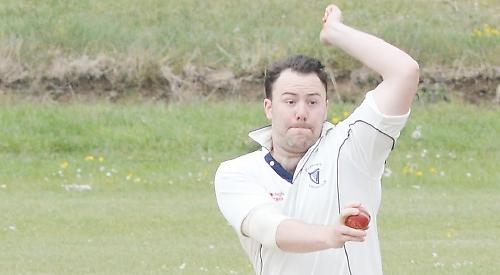 HARPSDEN 1sts suffered their first loss in the league for two years at the hands of CHALFONT ST GILES 1sts on Saturday with James Plested hitting a match-winning century for the visitors in their Division 1 clash.

Harpsden skipper Christian Whittaker won the toss and elected to bat on a flat pitch. Chalfont bowlers Dan Winter and Liam Cross started steadily taking a wicket each as Harpsden reached 66-2 from 22 overs as the openers completed their 11 over spells.

The hosts accelerated briefly with a hard-hitting 38 from skipper Whittaker but once he went there was no one to stay with innings mainstay Adam Birkett. Leg-spinner Chris Cross and off-spinner Alex Heaney took wickets at regular intervals as Harpsden struggled to 170 all out from 50 overs.

The Chalfont reply started cautiously as tight bowling from Tom Hancock and Ed Birkett limited the visitors to 23-1 from the first 10 overs.

Harpsden struggled to take the required wickets and once Plested got settled he took the game to the home spinners and single-handedly took Chalfont to victory by seven wickets.

This was a tough first day for Harpsden newly promoted to Division 1 against last-year’s runners-up Chalfont.

HURLEY 1sts’ Division 2 campaign got off to a losing start as they went down by 89 runs to TAPLOW 2nds at Shepherds Lane.

Taplow opener Neil Harrison-Smith proved to be the difference between the two sides with a century.

The hosts won the toss and invited Taplow to bat first. The Taplow opening pair scored at a steady rate for the first half a dozen overs before Mike Cole got the breakthrough, knocking out Andy Wheeler’s off stump.

Hurley picked up regular wickets to keep the score in check and some sharp catching by Josh Cole and Kuldeep Nothey saw the visitors slump to 96-5 after 24 overs.

Harrison-Smith was joined by Malik Hussain in a partnership of 96 for the sixth wicket as the Hurley seamers bowled too many short balls, allowing the batsmen to get on top. Henry Graham broke the partnership, trapping Hussain lbw. Maznar Abbas was next out, lofting Ridgeway to Taylor at mid-wicket.

Three wickets for Ridgeway brought the Taplow innings to an end in the 50th over on 236.

In reply Arshad and Simoes set off at a brisk pace with 13 runs coming from the first couple of overs. Simoes could only fend off a rearing delivery from Hussain with his gloves and was snapped up by Street behind the stumps.

Four wickets in as many overs saw the hosts slump to 40-4 after nine with Hussain and Farhad Abbas picking up a couple each. Only eight more runs were added in the next seven overs for the loss of Joe Graham and Josh Cole, both hitting lofted shots off Abbas. Varun Sharma and Mike Walton dug in to add 31 for the seventh wicket. Sharma took the attack to the bowlers at every opportunity, hitting Raja down the ground for a maximum before holing out to mid-wicket attempting a repeat.

Phil Ridgeway and Mike Walton added another 54 for the eighth wicket. Ridgeway gave a couple of chances but the keeper spurned them both. Farhad Abbas was reintroduced to try and break the partnership. Both batsmen withstood the barrage and Taplow turned to Maznar Abbas who finished off Hurley’s resistance.

With 15 overs remaining and Hurley entertaining faint hopes of salvaging a draw, Ridgeway chopped on to his stumps. Walton’s resistance was ended by an unplayable delivery from Abbas that left him off the pitch to take the off stump. The match ended when Nothey prodded to short extra with a further 11 overs remaining.

HARPSDEN 2nds opened up their Division 3 campaign with a win having seemingly thrown the game away in a batting collapse at WHITE WALTHAM 2nds.

The visitors were put into bat by White Waltham and despite the early loss of Sam Imlay, looked in control. Skipper Sasha Burgess was in imperious form displaying power both with his straight drives and his pulls. Ben Hancock also batted well and was particularly dismissive of anything short.

At 101-1 in the 16th over, a big score looked possible but the introduction of left arm spinner Mike Salmon brought the dismissal of Burgess for, what proved to be, a match-winning 62.

In the next over Hancock was bowled which precipitated a collapse, losing the last nine wickets for 27 runs in 19 overs. Only debutant Matt Hand looked at all comfortable as the rest of the batting fell apart, including James Brooks who retired hurt after pulling a calf muscle.

Because Harpsden were bowled out so quickly it was decided that there would be 10 overs played before tea. Rod Birkett and Toby Stevens opened the bowling and it was Birkett who got first blood as Usmani was trapped in front. Stevens then clean bowled Nasir before Birkett enticed Mahony into an injudicious shot and he was well caught by Andy Bryan.

The icing on the pre-tea cake was delivered by a good piece of fielding by Imlay, who with just one stump to aim it, ran out Henderson with a direct hit. After tea Tom Ham took the downhill, downwind honours, bowling a spell which included the wicket of Chapman with a good catch by wicket-keeper Jon Stanley. After a luckless spell from James Paice, Stevens and Birkett resumed their bowling partnership — Stevens ripped out the middle order with good pace and bounce and then Birkett dispensed with the tail with his off-cutters to leave the visitors victorious by 43 runs.