Woodcote have the better of draw with reigning champions 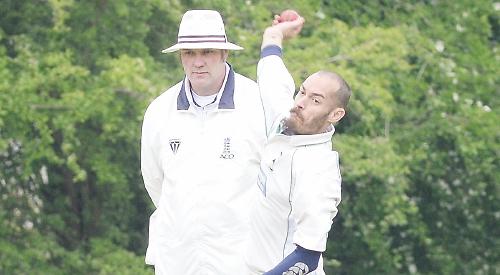 THE Dan Hayden era started in fine fashion for PEPPARD STOKE ROW as their new captain led his side to a six-wicket Berkshire League Premier Division triumph at home to WOODLEY on Saturday.

The hosts made a dream start as first team debutant Ruaridh Scott took a wicket with his first ball, castling Ananth Suraj with a yorker.

Sam Fooks then had Jordan Goddard well caught by wicketkeeper Michael Chard, and when Phil Duncan pulled off a one-handed catch at short mid wicket to dismiss Pradeep Ravindranath, Woodley were 30-3.

Fooks and Scott picked up another each as the visitors slumped to 48-5, but a rearguard from Anish Pandey and the hard-hitting Shakeel Bashir pulled Woodley back into the contest. Dion Sampson got to work and with Ian Jackson and Hayden claiming a wicket apiece, the away side were bowled out for 153.

Peppard Stoke Row lost Richard Walker and Duncan early on, but Andy Watts and Hayden shared a fine third-wicket partnership to put their side in control. The latter was particularly dominant and ended the game unbeaten on 83 from just 45 balls, smashing 14 fours and a six.

WOODCOTE had the better of the draw against reigning champions WEST READING.

Put into bat, Woodcote’s openers Ryan Lennard and James Wheeler gave the innings a good start with a 50 partnership, with Lennard going on to record his half-century. This enabled the middle order of Will Macdonald and Paul Knox the opportunity to play their shots and both recorded half-centuries in a stand worth 81.

When West Reading batted they made slow progress as spinners Will Macdonald and James Worsfold bowled accurate spells. When the new ball was taken Mark Pearson bowled a lively spell to claim three wickets and Paul Knox helped himself to two wickets as West Reading held on for the draw.

In Division 1 PEPPARD STOKE ROW 2nds got their campaign off to a winning start as they defeated FARLEY HILL by five wickets.

Farley Hill won the toss and decided to bat first in a match where 460 runs were scored and only 11 wickets went down.

Juniors Will Atkinson and Alfie Burnett opened the bowling for Peppard Stoke Row and Atkinson had success in the first over as Ditchburn top-edged, for Don Townsin to take a looping catch, low down at short third man.

Hill and Sheridan for Farley Hill had some easy early runs but as the Peppard Stoke Row bowlers found their line and length the scoring rate dropped. The batsmen accelerated and were beginning to score freely with a stand of 120 until Atkinson came back on and had Hill caught behind by Gerry Bacon for 80. Shortly after, he again had success, bowling Sheridan for 57.

The home side’s skipper Riaan Ackerman turned to his senior bowlers but, whilst he went wicketless, Olly Nicholson had a significant impact, removing Timms and Greef, who was Bacon’s third victim of the day. Given the unpredictable nature of the wicket, 229 off 45 overs looked a big ask.

Don Townsin and Gerry Bacon began the response cautiously but were increasing the pace when Bacon was caught at mid-on. Charlie Lang was run out by a direct hit from Sheridan.

This brought Olly Nicholson to the crease with Peppard Stoke Row at 95-2 off 26 overs and he transformed the innings with some brutal hitting with his 76 (50 coming off only 19 balls), which included six fours and seven sixes, leaving his side an easier target, which was achieved in the 44th over with Ackerman and Atkinson shepherding the visitors home.

The home team took full advantage of the conditions to amass 273-5 thanks to a personal best score of 132 from opener Jim Warren who conserved his energy by striking two sixes and 20 fours. The Checkendon middle order gave sensible support to set the West Reading batsmen a formidable target.

An accomplished half century from visiting captain Usman Ali and hard hitting contributions from numerous other players gave West Reading a chance of victory but home skipper Vikas Chib responded admirably with a decisive spell of 5-39, bowling with pace and accuracy. Offspinner Rama Adigantla also handled the pressure well taking 3-13 at the death. The margin of 61 runs was not a true reflection of a closely contested match that produced fine catches by various Checkendon players.

Elsewhere in the division GORING suffered a seven-wicket defeat at BRADFIELD.

Batting first the visitors were bowled out for 189 with Gary Niederheitmann top scoring with 91 runs from 87 deliveries. In reply Bradfield eased to 190 with the loss of just three wickets.

In Division 3 Hugh Asquith scored an unbeaten century to help PEPPARD STOKE ROW 3rds have the better of their draw at home to MORTIMER.

The experienced opener was in fine form on a good batting wicket although the hosts had slipped to 83-3 before a 172-run fourth-wicket stand between Asquith and U16 George Lee put the home side in the box seat.

Asquith struck 17 boundaries in his 110 not out and with Lee blasting 10 fours and four sixes in his innings, the hosts posted a competitive 255-5 in their 45 overs. The Weakley combination of father-and-son Nigel and Joseph accounted for Anthony Smith in the first over courtesy of a run out, but Nigel Payne and captain Archie Fritz then put on 114 to keep their side well and truly on track.

The introduction of Taylor Vines swung the game back in the hosts’ favour, however, as he took two wickets with his first two balls to initiate a collapse.

Mick Chard senior took a caught and bowled among his two wickets, and with Vines adding another to his haul and Lee capping a fine all-round display with two of his own, Mortimer were forced to cling on for the draw on 159-8.