Frost keeps his cool as side edge to opening day victory 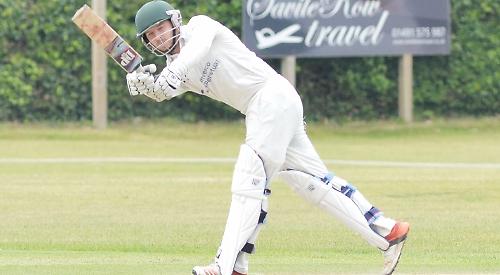 NEWLY promoted HENLEY 2nds got their Division 1 campaign off to a flying start with an 82-run win against WOKINGHAM at the Brakspear Ground on Saturday.

Having won the toss and electing to bat first the hosts put on 301-4 off their 50 overs with Will Legg hitting 65 not out and Tom Oldershaw and Euan Brock each scoring 64. In reply Wokingham were bowled out for 219.

In Division 2A KIDMORE END ran out winners by two wickets at HAREFIELD 2nds. Fielding first Kidmore’s James Walker took the first wickets of the campaign, thanks to a catch by Guy Ashby in the gully. The score was 20 for 2 after the first 12 overs, when the spin twins Peter Jones (10-0-24-1) and Ashby entered the fray.

The pair, when their line was straight, turned the pressure up and Harefield limped along at a slow rate. By the time drinks were taken at 25 overs the score was 51-3. Frost then brought himself on to bowl and he managed to take a couple of wickets in his 10 over spell, in tandem with wrist spinner Umer Faroqi, who was making his league debut for Kidmore End.

Harefield ground out a number of good partnerships built around their skipper Scott Morris who eventually was caught and bowled for 67 by Faroqi. As Harefield attempted to accelerate their score they had no answer for the accurate spin bowling of Ashby who returned to bowl at the end of the innings, finished with figures of 3-18. By the close of the innings, Harefield set Kidmore 180 to win.

Kidmore openers Tom Bodeker and Chris Pigden both batted well and looked settled, but the crafty left arm spinner, Martin Webb applied a great deal of pressure and soon it began to tell as six wickets fell for just 43 runs. By the 20th over the score card read 67-6. The counter attacking batting of Faroqi and the stubborn defiance of Frost arrested some of the momentum of the bowling side. Faroqi blasted 27 from 29 balls and helped Kidmore reach their first batting bonus point at 100 runs.

Shortly after the drinks break however, Faroqi had been dislodged, as had his replacement Peter Jones to leave Kidmore on 106-8.

Frost grafted out single after single in a tedious fashion and new partner Emmanuel batted in a similar style. As both batsmen began to feel comfortable the fielding side became agitated, never more so than when Emmanuel released the shackles striking two sixes into a nearby garden. Before Harefield realised it, the target was less than 20 runs away.

With aggressive running between the wickets and determined concentration the batsmen edged closer and closer to the target, the pressure took its toll on the young bowlers who started to bowl wides, the fielders started to misfield and more runs were stolen.

Before Harefield skipper could do anything about it the score was within a single shot. Frost duly obliged as he flicked the ball off his legs for four to win the game for the visitors.

In Division 3A Jack Clark took 5-25 to help WARGRAVE run out 32-run winners against FLEET.

Batting first Wargrave were bowled out for 176 with Will Allum top scoring with 68. In reply Fleet were dismissed for 144 with Razwan Hanif chipping in with 3-43.

WARGRAVE 2nds got their Division 5B campaign off to a winning start with a three-wicket victory against ALDERSHOT 2nds.

Batting first Aldershot were dismissed for 151 with Martin Smith taking 4-43 and Jerry Smith 3-26. In reply Wargrave reached their target of 154 for the loss of seven wickets.

Elsewhere in the division HENLEY 3rds crashed to a seven-wicket defeat at MAIDENHEAD AND BRAY 2nds.

Having been put into bat first the visitors were dismissed for 156 with Nathan Hopkins top scoring with 39. In reply the hosts eased to victory as they reached 157-3.