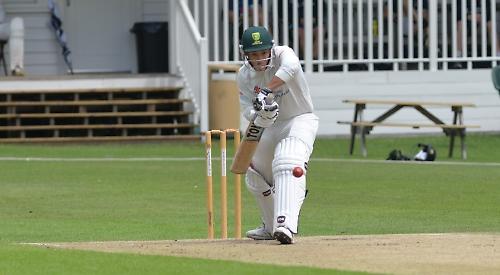 HENLEY suffered a narrow defeat at GREAT AND LITTLE TEW on Saturday in their opening Home Counties Premier League Division 1 match of the season in a match played in cold, overcast conditions.

The host club was missing a number of players through injury but was still fielding a strong side under the leadership of new skipper Harry Smith and with new overseas capture South African Jancan Adams making his league debut.

On winning the toss, Henley skipper Michael Roberts invited the opposition to bat – a plan which backfired due to the inconsistency of the opening attack and it was not until the introduction of the speedy Keegan that Smith was surprisingly bowled by a full toss which he appeared to lose sight of in flight.

The remainder of the Tew innings was built around a well-constructed 77 from Jordan Garrett helped by some cameo contributions, namely 46 from Curtly Slatter and 33 not out from the debutant Adams. The innings finally closed on 242-8 with Matt Rowe (3-50) the leading wicket taker.

In general terms the attack looked innocuous and lacked penetration despite the captain’s efforts to rotate all seven bowlers used.

The Henley innings began well enough with Roberts and Rowe putting on 40 before three wickets fell in quick succession. Roberts was caught on the square leg boundary and Rowe (caught behind) and Morris (bowled) with only four runs added.

Euan Woods, despite feeling unwell, and wicket-keeper Stewart Davison effected a recovery with a partnership of 66 before the latter succumbed to the spin of Ian Bryan.

Ashraf followed lbw first ball and the veteran Allaway who had incurred a rib injury whilst fielding had to retire hurt after only facing three deliveries.

After Woods departed for a well-crafted and mature 50 to a leading edge it was left to the tail-end to endeavour to get Henley over the line.

In the encircling gloom, Afridi, Russell and in particular Tom Nugent and Gurveer Singh edged the total ever nearer but it was not to be. With nine runs needed off the final over Singh holed out to long-on leaving the immobile Allaway and his runner stranded at the non-striker’s end. The Tew wickets were shared evenly between seam and spin with Tom Nugent coming in at number nine having batted as well as anyone. To fall only eight runs short was galling but Tew were the better side in all departments and deserved their victory.

A Henley side containing nine players with Minor Counties experience, six of them current, should have performed better than this in what can only be described as a lacklustre display but the team should not be over-criticised on one poor performance as better times undoubtedly lie ahead.