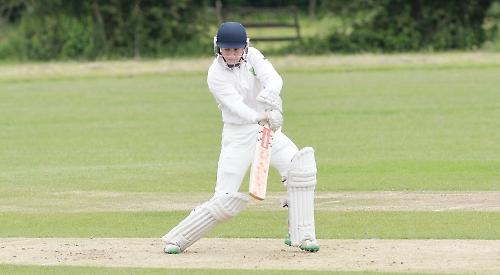 AN unbeaten 192-run fourth-wicket stand between 19-year-old duo Fergus Nutt and Jake Leach fired PEPPARD STOKE ROW UNICORNS to victory in their first ever National Village Cup game as they triumphed by 59 runs at WRAYSBURY.

After Unicorns skipper Richard Ashton won the toss and chose to bat, openers Will Legg and Andy Watts sped along at more than six an over until the former was run out with the score on 52.

Watts was bowled by Wraysbury captain Andy Prasad shortly after, and when Dan Hayden was run out for 0, the visitors were teetering on 62-3.

What followed was a partnership of skill and maturity, with Nutt and Leach pacing their innings to perfection as they mixed rotation of the strike with the occasional maximum. Nutt brought up an his century with a flicked six over square leg — one of six he struck — while Leach’s unbeaten 80 featured eight fours and two sixes, Peppard Stoke Row closing on 254-3.

Legg gave the Unicorns a dream start when defending their target as he bowled Matthew Ward second ball, and with Dan Hayden trapping dangerman Naeem Baig and Legg cleaning up Jayesh Mohan, Wraysbury were 45-3. Gordon Morgan and Tanjeet Singh redressed the balance with a 59-run stand, but useful spells from Olly Nicholson and Chris Proudfoot saw the required rate continue to rise.

The latter removed Singh, caught at gully by Leach, and Morgan, superbly caught low down by Nutt at cover, as Peppard Stoke Row turned the screw and left the hosts 132-5.

Prasad launched a trio of huge sixes but was well caught by Nutt on the boundary off the bowling of Satheech Elanganathan, and when the combination removed Raheem Yasin, the Unicorns were well on top.

U16 Will Atkinson took his wicket tally for the season to 10 by cleaning out the lower order as Peppard Stoke Row progressed to the next round.