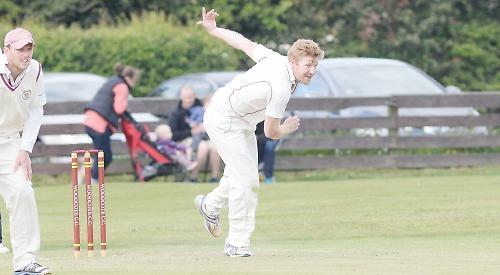 WOODCOTE went down to a five-wicket home defeat in their Premier Division clash with SULHAMSTEAD AND UFTON on Saturday.

Rain on the morning of the match made this a good toss for the visitors to win as batting conditions in the first innings were tricky.

Woodcote slumped to 76-6 and the innings was only rescued to some extent by a patient 46 from James Wheeler and late-order runs from Steve Henderson, Jonny Clark and Ryan Van Heerden.

For Sulhamstead, opening bowlers Doug Macdonald and Matt Gill bowled good spells as Woodcote were all out in 39 overs.

After tea the Woodcote bowlers demonstrated that the result was not a foregone conclusion as Sulhamstead were quickly reduced to 68-5 thanks mainly to a fine spell of bowling from Paul Knox. However, a fifth wicket partnership of 73 between Jamie Seward and Aaron Briggs saw Sulhamstead home to victory in just over 30 overs.

Elsewhere in the division South African duo Dion Sampson and Matt Hopper bowled PEPPARD STOKE ROW to a second straight victory as they triumphed by 76 runs at WELFORD PARK.

The visitors’ openers Andy Watts and Fergus Nutt shared an opening stand of 44 before the latter was castled by a Joe Lawrence delivery which nipped back substantially.

Paddy Hennessy was then run out but captain Dan Hayden smashed 60 from 40 balls before being stumped off the wily Ian Herrington.

Watts matched that score before mowing a ball to Lawrence off Jamie Cork, and when Richard Ashton was deceived in the flight by Herrington, the visitors were wobbling on 173-7.

However, Michael Chard and Chris Proudfoot batted sensibly, enabling the visitors to reach 219-9 in their 45 overs. Ashton gained a modicum of revenge on Herrington with a sensational diving slip catch which gave Matt Ravden his first Premier Division wicket, and Hopper then got to work.

The swing sensation bowled metronomically to claim 4-20 in a sensational 12-over burst, and with Sampson claiming a triple-wicket maiden after the drinks break, Welford were 71-8. Some defiant hitting from Cork and James Barrett saw the pair share 51 for the ninth wicket, but the imperious Sampson — displaying all his variations — accounted for both as the hosts were dismissed for 143.

In Division 1 BRADFIELD visited Peppard Common, after an 18-month hiatus, to find a mostly dry, firm wicket but with a few greener patches where rain had seeped under the covers for their clash with PEPPARD STOKE ROW 2nds. This encouraged them to bowl first, after winning the toss.

Home openers Charlie Laing and Brett Everett made sedate progress against some lively and accurate bowling until the former was out with the total 41 and his partner followed shortly afterwards but Peppard Stoke Row had used up some overs coping with the bowling.

Sam Fookes provided the backbone of the rest of the innings, until out near the close for 79. In the meantime Ollie Nicholson provided acceleration, starting with a boundary off his first ball and continuing with five sixes — and a pavilion window — in his eventual 78.

The remaining batsmen could find little momentum and the closing 229-7 appeared 20 or 30 runs short of par, Mike Reekie’s loopy deliveries proving too much for four batsmen.

A late tumble of four wickets for 14 runs brought Peppard Stoke Row back into contention but Jamie Stansfield and Bradfield skipper Jack Byrne saw the visitors home with 11 balls to spare.

Elsewhere in the division GORING went down to a five-wicket defeat against MORTIMER WEST END.

CHECKENDON’S visit to SULHAMSTEAD AND UFTON 2nds found skipper Matt Burrows in good form as he hit 72 and shared a third wicket partnership of 87 with Sanjay Dove.

This enabled the home side to reach 222-7 despite two early wickets for Rajesh Tiwari helped by Jim Warren’s diving, one-handed slip catch.

John Acland-Hood led the reply for the visitors with a fluent 69 followed by Ravi Vedanthappa’s rapid 48.

The match was poised with Checkendon on 196-4 at the start of the 40th over when inswing bowler Anand Gurung appropriately swung the contest by taking a clean bowled hat-trick.

Gurung finished with 5-41 as the visiting side lost their last six wickets for 11, conceding victory to Sulhamsted by 15 runs.

Asquith followed up his opening day unbeaten 110 against Mortimer with 138, sharing an opening stand of 201 with Don Townsin.

Gerry Bacon and Pradeep Kumar kept the momentum going as the visitors totalled 292-4 on a fine track at RAF Vine Lane.

Puneet Kapoor played a lone hand in resisting the visitors with a stunning 137 before edging Dyer to wicketkeeper Mark Lambert, and with James Hern claiming four catches in the outfield, Ruislip were eventually forced to hang on for the draw at 204-7.