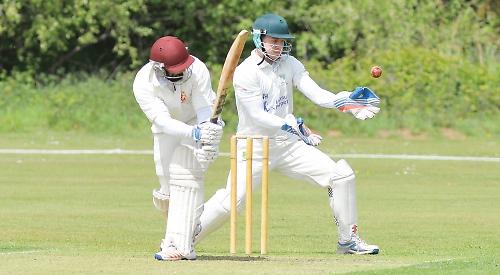 HENLEY 2nds narrowly lost by one wicket away to BOYNE HILL last Saturday in their Division 1 encounter.

Batting first Henley put on 272-6 with Chris Ellison top scoring with 104 while Alex Gill hit 52. In reply Boyne Hill just kept up with the required run rate and in a tense final over hit the winning runs with just one ball of the match remaining as they closed on 275-9.

In Division 2A KIDMORE END suffered a four-wicket defeat at home to CHESHAM 2nds.

Batting first Kidmore End scored runs quickly on a sultry afternoon where the ball raced to the boundary and there were cover drives, brutal cut shots and lofted drives.

The second wicket partnership between the Sheldon brothers saw them put on 88 runs before Tom Sheldon was dismissed for 75 off 77 balls. Jeff Sheldon played the anchor of the innings and allowed the more aggressive batsmen to bat around him.

Guy Ashby took up the mantel of the stroke maker and scored 65 from 80 deliveries and Kidmore End looked set for a score of more than 300. However, in the last 10 overs of their innings Kidmore sowed the seeds of defeat as a flurry of wickets fell.

Only Antony Holland batted to his potential, showing the necessary skill to score quickly at the end of the innings. The innings ended 267-9 from their 50 overs,. Chesham batted sensibly as their openers laid a good foundation; 87 for the first wicket, which fell to a catch by Antony Holland behind the stumps.

The bowlers wheeled away, but with the pitch offering little movement and the bowlers struggling for a consistent line the batsmen simply had to run well between the wickets and dispatch the bad ball. It was only the off spin of Calem Taylor that offered any control, as he bowled well to the field he had set off his bowling. Although Kidmore managed to strangle out a couple of wickets in such a way that there was some pressure being applied on the Chesham team around the 35-over mark, the free hitting batting of Theo Weatherall and Waqas Butt put the game to bed with two overs to spare.

Neal Robinson hit 100 not out to help WARGRAVE move to the top of the Division 3A table as they defeated FINCHAMPSTEAD 3rds by 222 runs. Batting first Wargrave put on 267-5 with Michael Cowdell chipping in with 76. In reply Finchampstead were bowled out for just 45 runs with Mandip Sohi finishing with impressive figures of 7-13.

HENLEY 3rds took the derby honours in their Division 5B clash with WARGRAVE 2nds at Nettlebed. The hosts won the toss and elected to bowl first. Starting the field with only eight players they kept the runs down with Wargrave only going at two an over due to the bowling from Nick Johnson and Sean Taylor.

When the rest of the team arrived Henley tightened the screw and managed to nick a couple of wickets. Regular wickets fell with some good catching behind the stumps from stand in keeper and skipper Nathan Hopkins and three catches for Alex Johnson. Wargrave ended on 162-9 from their 52 overs.

In reply, despite the loss of Rob Kenworthy, Henley never looked in doubt. The returning Price hit 50 not out supported with some strong striking from Hopkins before Adam Lubbock came in and hit the ball all over the park for his 63 not out and secured Henley's first win of the league season.

In Division 9A KIDMORE END 3rds suffered a 68 run defeat against THATCHAM TOWN 4ths. Thatcham, batting first, put on 175-8 with Fish taking 4-27 for Kidmore End. In reply Kidmore End were bowled out for 107.