Birkett and Franklin help side to first top-flight win 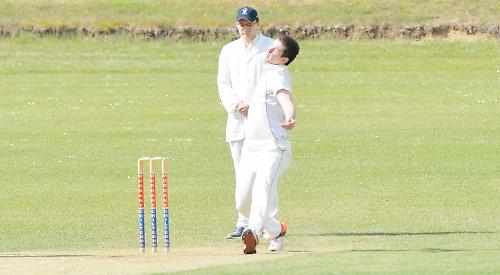 AN unbroken partnership of 123 for the seventh wicket between Stef Franklin and Adam Birkett saw HARPSDEN record their first Division 1 victory at PENN AND TYLERS GREEN on Saturday.

Harpsden won the toss and elected to bowl first. The pitch offered significant and at times excessive bounce although limited lateral movement. This set the tone for the Penn innings, with the Harpsden seamers exerting control throughout the innings although unable to take wickets in the face of careful and diligent batting from the hosts’ top order.

Harpsden’s seam trio of Johnny Wright, Tom Hancock and Ed Birkett bowled 37 of the 52 overs between them as Penn set 208-9 from their 52 overs. Wright was the pick of the bowlers, bowling a couple of long spells and running in from adjacent to the sight screen at the short end of the ground.

Lyle Heilbron and Ben Hancock started a Harpsden counter-attack although neither could go on and, when they were both dismissed in the same over by Lance, Harpsden were staring down the barrel at 86-6.

Franklin and Birkett set about their work, with Franklin being the aggressor initially, taking some risks against the off-spin of Paul Francis; Birkett played the perfect foil to Franklin, playing low risk cricket and keeping the ball on the ground with a series of off-drives from both the spinners and the seamers.

As Harpsden got closer to the target both batsmen played with more freedom and aggression, hitting a number of sixes each as Harpsden ran out winners by four wickets with five overs remaining.

An encouraging innings from Henry Graham helped HURLEY fight back from 29-4 in their Division 2 clash with visitors AMERSHAM HILL.

After winning the toss and batting Dave Simoes and Graham launched an entertaining counter attack with the former reaching his 50 with a straight six over the sightscreen. Simoes fell two balls later with the score on 161. Phil Ridgeway and Joe Graham pressed on adding 94 in 16 overs allowing Hurley to declare after 50 on 255-6.

Imran Arshad made the early breakthrough in the third over with one that kept low and bowled Ron Hedley six inches above the deck. Henry Graham completed a day bowling Collison as wickets disappeared regularly.

Jordan Richardson-Hill tried to steady the innings but debutant Akhbar Shah bowling with pace and seam trapped him lbw. Simoes produced a sharp bit of keeping to stump Joseph off Arshad.

At 51-5 the visitors were on the back foot. Shah took three wickets in four balls as the visitors collapsed to 53-8. Natarjan attacked the bowling of Scott Taylor taking 18 off the 29th over, but strong leadership kept the bowler on and he took his revenge bowling him in the 31st. Amersham finished on 104 in the 38th over with skipper Phil Ridgeway trapping his name-sake to give Hurley maximum points.

HARPSDEN 2nds kept their winning start to the Division 3 season intact against DENHAM with another good bowling and fielding display.

The Denham opening batsmen struggled against the Harpsden opening pair of Tom Ham and Rod Birkett with Birkett going for only eight runs in his first eight overs.

The batsmen got no solace as Toby Stevens came into the attack as he quickly found pace and bounce that troubled the batsmen. It was Stevens who took the first wicket as he caught Hicks in two minds with another back of a length ball that bounced.

James Paice and Ollie Heath then joined the attack and although it was Paice who got the wickets with 3-52 off his nine overs, Heath was as economical as ever, going for only 15 in his seven overs. The bowlers were aided by some good fielding and catching, with sharp chances being taken by Burgess, Ham, Stanley and Wilson.

When Ben Wilson came into the attack and was joined by the returning Stevens it didn’t take long for 115-5 to turn into 128 all out. Wilson bowled with good pace and movement and he took 2-2 off his five overs whilst Stevens took his second consecutive league four-wicket haul.

Denham opened the bowling with their spinners and immediately put Harpsden in trouble as skipper Sasha Burgess was bowled. Ollie Heath replaced him and survived some nervous moments but batted sensibly for his 21 before being dismissed by a stumping.

This brought Tom Cary in to join Sam Imlay and the two progressed serenely towards the target until Cary was given out caught behind just a few runs short of victory. Matt Hand joined Imlay and it was the latter who polished off the victory with a couple of big straight hits, finishing on 70 not out.

Having lost their opening bowler to illness on the morning of the game, HURLEY 2nds turned up at DENHAM 2nds with 10 players to find the hosts could also only field 10 in their Division 4 clash.

The Denham skipper won the toss and invited the visitors to bat first on a wicket which showed a couple of damp patches where overnight rain had seeped through the covers.

Nigel Haines began his role as captain and chose to bat with Matthew Wadsworth opening alongside Clive Williams. Wadsworth shared a partnership of 25 in eight overs before being bowled by Josh Simpson. Wadsworth was replaced by Mike Walton who added 63 for the second wicket with Williams.

The introduction of John Magner changed the complexion of the game. After a loose opening over, he found his line and produced a good delivery to nip back and bowl Williams. Four deliveries later, Walton was gone, a low outside edge being plucked out of the air by a diving Treacy at slip.

The star of the Hurley batting was 14-year-old Josh Cole, whose career best 72 not out helped ensure Hurley posted a competitive total. Abdullah Ali added 26 before being stumped off David Hales. A seventh wicket partnership of 38 between Cole and Haines enabled Hurley to declare one over early on 205-6.

Hurley opted to bowl with the old ball, Mo Basharat and Haines opened the attack and kept the run rate down to two an over for the first nine overs. With no breakthrough coming, Haines was replaced by Tom Folkman and the new ball was taken by Basharat. The new ball did the trick, as Basharat got it to swing. A full length, slower delivery accounted for Tobin, pinning back the middle stump. Treacy joined his skipper in useful 36-run stand for the second wicket, ended by the impressive left-arm seam of Wadsworth. Tom Folkman bowled a tidy spell, conceding only 18 runs from five overs. Josh Simpson played positively, adding 61 with Treacy in 11 overs before Wadsworth returned to pick up the wicket of Treacy.

Simpson continued to attack and survived an appeal for a stumping off Haines. His reprieve didn’t last long before Haines got his man. Having swept the left-arm spinner for two boundaries, Simpson skied to extra cover where Basharat took the catch.

With 68 runs needed from 15 overs, the match was well within the grasp of Denham as Swain joined David Hales. Wadsworth continued his fine second spell and was rewarded with the wicket of Hales. He then contributed to the downfall of Swain as putting down a difficult chance at mid-wicket, he recovered to get the ball to Basharat who effected the run out as confusion between Swain and Magner saw the batsmen well short of his ground. With the required rate creeping up, Denham’s hopes of victory were receding and the return of Basharat ended them as he bowled Jeff and Sam Simpson in the 45th over.

With four overs to play, last man Phil Ashworth joined Magner and successfully played out the remaining deliveries to save the match.