Maharajas have edge in derby encounter 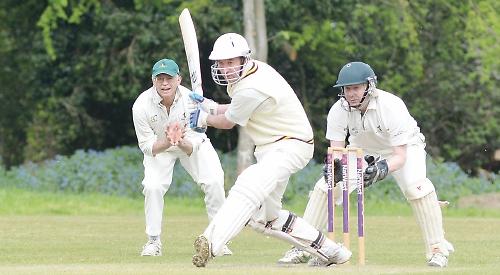 TAYLOR VINES stole the show with a sensational spell as PEPPARD STOKE ROW UNICORNS overcame THE LUDDITES by 158 runs in their friendly on Sunday.

After being put into bat, Unicorns openers Don Townsin and Richard Ashton rotated the strike efficiently as they raced along at six an over in adding 94 till the latter retired for 52.

Townsin, Phil Duncan and Chris Humphreys showed their class and with Craig Anderson striking a quick-fire unbeaten 23, the Unicorns closed their 35 overs on 254-2.

The Luddites started well until Tim Woodward nicked Fergus Nutt to wicket-keeper Gerry Bacon with the score on 36, but then left-arm spinner Taylor Vines entered proceedings. After five overs he had claimed figures of 4-3, and while he conceded seven in his last two overs, his haul of 4-10 was match-winning.

Josh Perkins came on to take 2-15, Anderson enacted a direct hit run out and with Humphreys bagging 1-0 in his solitary over, the visitors were knocked over for 96 in 26.4 overs – bowled out in just one hour and 20 minutes.

Matt Ravden struck his first PEPPARD STOKE ROW MAHARAJAS century as his side won a thrilling local derby by four runs against HIGHMOOR on Sunday.

The Maharajas lost Dom Hall early on, but Charlie Laing and Ravden steadied the ship. The former fell on 19, but with Scott Harris adding a fluent 30, Peppard Stoke Row began to take control.

Having unfurled a remarkable switch hit earlier in his innings, Ravden entered the last of his side’s 35 overs on 94 not out, but ran a trio of twos with U14 Nathan May to bring up his maiden ton. May ended unbeaten on 11 as Peppard Stoke Row totalled
189-5.

Allan May took an early wicket in the Highmoor reply, but Rizmy and Shamil set the platform for a comfortable run chase.

U14 Owen Ravden removed the latter and Aled Roberts caught and bowled Rizmy and with Harris taking 2-33 in his seven overs, the Maharajas came back into the contest.

Matt Ravden added a wicket to his successful day, and with Highmoor needing 10 off the last over, his son Owen stepped up to the plate.

A no ball and wide were followed by some bowling of the utmost skill and maturity, and Highmoor ultimately fell short as the youngster completed a memorable day for the family.

Fergus Nutt struck 104 not out to help RACAL/PEPPARD STOKE ROW to victory in their Reading Midweek League game at HUTCHISON 3 last Tuesday.

The visitors lost two early wickets as they slipped to 30-2, but Nutt and Richard Ashton shared an unbeaten stand of 103 to take their side to 133-2 from 12 eight-ball overs.

Will Legg snaffled an early wicket, aided by an early catch-of-the-season contender by a diving Ashton at first slip, and Sol Robinson also claimed a wicket.

Riaan Ackerman (3-13) and Rob Dyer (2-12) turned the screw before U16 Dan Bacon, who turned the ball both ways during his one-over spell, sent himself to the top of the club’s bowling averages by claiming 1-1, unaided by captain Michael Chard misjudging a tough chance at short cover.