Udeen in fine form as hosts ease to 10-wicket victory 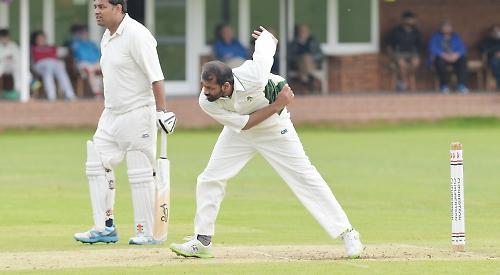 HENLEY 2nds went down to an eight-wicket Division 1 defeat against COOKHAM DEAN at the Brakspear Ground on Saturday.

On a showery day Cookham Dean’s captain Ben Millar won the toss and had no hesitation in bowling first. With intermittent squalls punctuating the first couple of hours of play, batting was always going to prove a little harder than usual.

Price and Goodson proceeded carefully, doing their best to counteract an impressive opening spell from Wasim Ahmed. Once Goodson fell for 12 to Maharoof, the door was open for Ahmed (3-21) to blow through the Henley top order, snaffling Price, Brock and Legg in quick succession to leave Henley reeling at 34-4.

Ahmed was replaced at the top end by off-spinner Tapiwa Mufudza (2-21), who bowled with skill and control throughout his spell and accounted for Chris Ellison (14) and wicket-keeper Charlie Homewood (22). Zac Jones provided the only durable resistance, his 58 proving to be the only score of note in an underwhelming batting performance by Henley. The hosts were eventually bowled out in the penultimate over for 149.

Henley’s bowlers started brightly with Simon Wheeler dismissing opener Marrow early on, aided by a sharp catch at second slip by Brock. That wicket was shortly followed by Rastogi feathering a full ball behind off the bowling of Harry Jordan and Henley were in the hunt at 32-2.

However, a composed partnership between Millar (65 not out) and Lowden (47 not out) was enough to see off the rest of Henley’s challenge, culminating in an emphatic victory for the visitors.

KIDMORE END ran out 55-run winners in their Division 2A clash at EVERSLEY in a match that was reduced to 34 overs a side following a delayed start.

Having lost the toss Kidmore End were put into bat and the top order had to graft out the start of the innings against a bowling attack that was well suited to exploit the initial swinging conditions.

Kidmore End’s top order were not able to see off this challenge and within a matter of a few overs the score read 8-4 with Eversley firmly on top. A counter-attacking partnership between Leonard and Grant helped Kidmore to 41 before Grant was out and then it was not long before Bodeker was out to a run out by a pick up and throw by the Eversley fielder Magowan.

Captain Frost and Leonard stoically dug in to eke out another 20 runs mainly from the fine striking of Leonard who fell for 34.

Taylor and Frost then scored the largest partnership of the game, hitting 40 runs between them. This partnership was assembled by Frost sweeping and clipping the ball into the leg side, whilst Taylor took a more lusty approach.

Again Eversley’s fielding stood strong in the face of this growing partnership and Taylor was caught on the boundary after the ball had travelled high into a windy, gusty turbulent sky. Eventually Kidmore End were restricted to 129-9 from 34 overs.

Kidmore took the decision to attack the batting side and this paid off immediately as Frost broke through in the first over of the innings trapping Ford lbw for 0.

This initial success appeared to be a false dawn as Last and Magowan took the score to 24. It took an inspirational piece of wicket-keeping from Leonard to inspire Kidmore as he took a fast leg side stumping off the left-arm seam of Emmanuel.

This turned the match and moments later Frost bowled Magowan. Ashby now entered the fray and trapped the key batsman Niblett lbw and within a few deliveries, Frost (7-2-12-3) had Madina caught by Hamish Grant.

Ashby then took a smart catch off his own bowling and Eversley had collapsed from 23-1 to 52-6. The seventh wicket saw the dismissal of the last recognised batsman Howorth who slashed at an Ashby delivery for Tom Bodeker to take a two-handed catch in the gully in mid-flight.

After this the variations of Faroqi were too skilful for the tail end as he took three wickets in one over without ever being on a hattrick and finished off the tail in a clinical fashion.

Top-of-the-table WARGRAVE remain the early season pace setters in Division 3A as they ran out 52 run winners at NEWBURY.

In Division 5B HENLEY 3rds secured a three-wicket victory at WOKINGHAM 3rds.

Heavy showers interrupted the start time but eventually subsided and the game started after a delay to let the square dry. Henley won the toss and put Wokingham in to bat.

Nick Johnson and Andy Chappell opened up, both offering tight lines and restricting early runs on what was a difficult wicket to score meaningful runs on.

Johnson was the first to strike in the seventh over as the Wokingham opener looked to drive aggressively through the covers only to spoon it high over captain Nathan Hopkins who took a difficult catch running backwards to set Henley on their way.

Chappell struck in the next over forcing the batter to edge behind with Manoharan taking the simple catch. Henley’s opening bowlers continued to control the game as the steady stream of wickets continued.

There was some good fielding and notable three catches for Alex Johnson and one for Tom Jordan on his first game for Henley 3rds taking a grab diving in front of him off the bowling of Chappell. His brother Nick took another three wickets at the other end and both openers ended up with four wickets to their names.

A run out from N Johnson left Jordan to pick up the opposition’s final scalp with his first wicket for the side. Henley had really imposed themselves with only one Wokingham player reaching double figures as the hosts were bowled out for 66.

Henley got to their target eventually but it wasn’t plain sailing. Alex Johnson was caught behind in the second over that gave Wokingham an instant sniff of hope.

With runs having to be earned on a challenging wicket, returning John Neville also fell cheaply. Hopkins steadied the ship, adding 31 runs to the cause, but wickets kept on falling around him.

Lubbock tried to finish the game quickly as he had successfully done last week, but fell cheaply as Ranger, Manoharan and Gould couldn’t steer the visitors home.

Nick Johnson came in at number eight and Alex Harris White at nine kept cool heads to put the game to bed.

Elsewhere in the division WARGRAVE 2nds crashed to a 121 runs defeat at home to FALKLAND 3rds.

Adit Rajeev was in fine form with the ball for Wargrave as he took 4-55 but this could not stop the visitors from posting an imposing 218-9 in their innings. In reply Wargrave were bowled out for 97 runs.

Ashar Udeen was in fine form with the ball for KIDMORE END 2nds as his side ran out 10-wicket winners against NEWBURY 2nds at Gallowstree Common in Division 7A.

The visitors, batting first, were bowled out for 70 with Udeen taking 5-40. In reply Kidmore End eased to 73 without loss from just 11.2 overs.