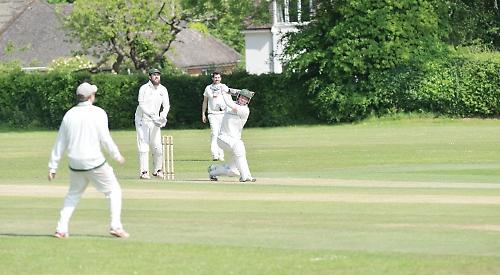 HENLEY 2nds secured a 10-wicket victory away at
FINCHAMPSTEAD in Division 1 on Saturday.

Both sides needed to win to get over their shaky starts to the new season. Finchampstead had lost their opening three matches while Henley’s progress had slipped after their week one victory.

Under cloudy skies but on a pitch that certainly looked as if it had more than a few runs in it, Finch captain Simon Bell won the toss and elected to bat.

Openers Jenkins and Lane began well before Harry Jordan, who returned figures of 2-18, prised both out. Lane was undone by a ball that angled in to him and did just enough to find the edge.

It wasn’t long before Wheeler got in on the act, first dismissing Bell with a leg-stump yorker, then extracting the middle order of Eaglesham, Adkins and Predgen in quick succession, leaving Finchampstead on 48-6 and Wheeler with final figures of 5-24.

Dunstan and Brock cleaned up the tail and Henley had a modest target of 60 to chase.

Any hopes that Finch had of applying the same pressure on Henley’s batsmen were quickly dismissed as Barnes, 42 not out, and Goodson, 18 not out, dispatched the required runs in 6.2 overs to seal the victory.

KIDMORE END defeated KEW by 113 runs in their Division 2A clash.

Kew won the toss and chose to bowl, hoping to take advantage of the humid conditions and a slightly green pitch.

But opening batsmen Tom Sheldon, who hit 35 from 53 balls, and Jake Easton, with 43 runs from 47 balls, dominated the bowlers.

Sheldon caressed the ball firmly through and over the fielders on the front foot and guided the ball off the back foot.

His opening partner had a more muscular style, launching both opening bowlers for large straight sixes as they put on 83 runs for the first wicket.

When Easton was out, Sheldon followed moments later caught behind by a good piece of glove work from the keeper.

This brace of wickets swung momentum back in favour of the Kew side and, although the middle order temporarily recovered, a second flurry of wickets meant Kidmore had lost six wickets for 49 runs, leaving them from 82-0 to 131-6.

Seven years ago Guy Ashby, batting at 11, and James Frost, at 10, scraped together a last wicket partnership of about 20 runs to beat Kew by one wicket.

Now, the pair found themselves together again with their side in another precarious position against the same opposition.

Together they would go on to build a club record sixth wicket partnership of 182.

Frost had a difficult start, nearly dismissed three times in his first five balls. But Ashby, who was already on 30 when Frost joined him, soaked up the pressure, stroking the ball through the covers.

As the pair dug in, they started to run well between the wickets and this frustrated Kew, who had brought back their opening bowler in an attempt to kill off the batting side.

As Kew became infuriated by the batting partnership more bad balls were bowled and Ashby initially, and Frost a little later on, started to punish the poor bowling.

The 28-over partnership gathered speed as the innings came to an end with regular boundaries.

Ashby drove the seamers and lofted the spinners in his innings, which included four sixes, while Frost swept the spin bowlers and clipped the seamers any time their line strayed.

The partnership helped Kidmore End to a club league total record of 313-6 from 50 overs.

Ashby scored his maiden league century, 124 not out from 125 balls while Frost scored his first league half century, 68 not out from 76 balls. A weary Frost then opened the bowling and took a wicket in the first and his second over. He then took his third wicket when the score had only reached 26, all three were clean bowled.

Then Umar Faroqi was brought on and took a wicket making the score 34-4.

But when it appeared that the game would be over quickly, Kew skipper Will Shaw and keeper Sam Booth went on the counter attack and raised the run rate to more than six an over.

Kidmore spinners Calem Taylor and Guy Ashby were then asked to bowl tightly to reduce the number of boundaries being hit.

Taylor then made the breakthrough when he induced a top-edge from a sweep shot by Booth, who was caught by Faroqi for 40.

After a drinks break, Frost bowled again and in a short burst he took another two wickets, including that of Shaw who had hit 83 runs from 87 deliveries.

He was caught by Fountain on the boundary, giving Frost figures of 5-28 and reducing Kew to 161-6. Taylor then bowled the ninth batsman and Faroqi picked up his second wicket of the game.

The innings and the match was wrapped-up by Taylor who, fielding at point, ran out the last man to ensure a convincing win.

WARGRAVE maintained their first place position in Division 3A despite drawing at home to
FALKLAND 2nds.

With the hosts electing to bat first, they posted a score of 216-8 with captain Neal Robinson top scoring with 68 before he was bowled by Sam Trumper.

Their other main scorers were opener Luke Taylor, who hit 32 before being trapped leg before by Mark Baker, and Michael Cowdell, who made 34 before being caught by David Bloor off the bowling of Shiryar Ahmed.

In reply, Wargrave restricted the visitors to 119-9 off 48 overs but were unable to knock over the last wicket. Razwan Hanif was the pick of the bowlers, returning figures of 5-28.

In Division 5B, HENLEY 3rds beat ALDERSHOT 2nds by five wickets thanks to stand-out performances from Andy Chappell with the ball and Nathan Hopkins with the bat.

Henley won the toss and elected to field, a decision which instantly brought results as opener Ben Harris was caught by Ollie Gould off the bowling of Nick Johnson for a duck.

Wickets fell regularly and Aldershot were bowled out for 149 off 44 overs with four of their batsmen reaching double figures. Chappell was the pick of the bowlers, returning figures of 4-51.

In reply, Henley lost both openers early and it was down to captain Hopkins, in at three, to steady the ship. He hit a half-century before being bowled.

Hopkins was ably supported by Nick Johnson who saw out the innings with an unbeaten 32 as Henley reached the match-winning total for the loss of five wickets.

Elsewhere in the division, WARGRAVE 2nds beat BRACKNELL away by two wickets.

The visitors won the toss and elected to field, restricting the hosts to 103 all out inside 41 overs. Scott Walker was the pick of the bowlers with 4-28 while Scott Morton picked up 3-25.

In reply, Wargrave reached their target within 32 overs for the loss of eight wickets.

KIDMORE END 2nds played out a thrilling draw with WOKINGHAM 4ths in Division 7a which saw the visitors fail to score two runs off the final ball of the game.

Kidmore won the toss and elected to field and Wokingham’s openers, John Barker and Dersh Patel, added 68 for the first wicket.

But Wokingham continued to pile on the runs on a good batting service, making their way to 164-4 with relative ease.

The hosts’ captain Patel completed a solid 53 before he misjudged one of Will Patey’s leg breaks and was well held by Jonny Abbott.

The tide then started to turn for the visitors as they picked up wickets at regular intervals with Udeen and Joe Webster bowling good spells towards the end of the innings.

There were also two run-outs as Kidmore restricted Wokingham to 201 all out.

Udeen finished with another five-wicket haul with figures of 5-68 and Webster’s final analysis was 2-26.

Kidmore found life tricky when they replied with the opening pair of Chris Pigden and Mark New needing all their experience to negotiate a good opening spell from Cable and Patel.

Pigden was first out for 13 which brought Cameron Livingstone-Smith to the crease and he and New added 60 for the second wicket.

New was bowled for 36 off his pads just before the drinks interval with Kidmore’s total on 84.

After the break, wickets were lost at regular intervals when the batsmen were getting set. Livingstone-Smith’s dismissal for 59 with the score on 122-4 put the game in the balance.

However, the middle and lower order failed to push on after getting starts and so struggled to get over the line.

Vish Patel then bowled a tight final over, conceding just four runs, and the game ended in a draw.

HENLEY 4ths forfeited their Division 7B match against TRING PARK 3rds and remain second from bottom in the table.

Wargrave won the toss and inserted Kidmore End who posted 160 all out from 41 overs. Their top scorer was Edward Ravenhill who hit 53 before being caught by Ken Clark off the bowling of Lewis Bowers. Andrew Hattey returned the best figures with 4-37.

It took Wargrave 40 overs to chase down the winning target and they lost seven wickets. Their top scorer was James Moss who hit 42 before being caught by Todd Butler off the bowling of Harry Ingram.

Kidmore’s best bowler was Tom Wilkinson with 4-17 off his six overs.