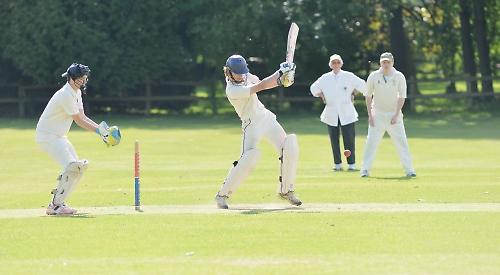 HARPSDEN recorded a resounding 167-run victory away at BRAYWOOD in Division 1.

After losing the toss and put into bat, Harpsden made a shaky start when opener Sam Imlay was trapped leg before on eight in the second over.

This brought Will Stevens to the crease to join Adam Birkett and both batsman punished any loose bowling.

Birkett fell for 27 to leave Harpsden 69-2 which introduced captain Christian Whittaker. He wasted no time in showing his intent and his first ball through covers for four.

He would keep sending the ball to the boundary, aided by Stevens who scored 52 before being clean bowled.

Then, despite losing wickets in the final few overs, some hard hitting from both Ben and Tom Hancock, as well as Stef Franklin took Harspden to 269-9 declared from their 50 overs.

Harpsden took the old ball, with Lyle Heilbron and Jack Brown bowling with good control and the breakthrough came when Ellis Craig chipped the ball straight to the Whittaker at short cover, off the bowling of Brown.

This brought about a collapse as four more wickets fell in quick succession leaving Braywood teetering on 40-5.

The highlight was a one-handed diving catch by Heilbron off his own bowling to dismiss Zahoor Ahmed for two.

When pace was introduced, Braywood didn’t fare any better, with Tom Hancock picking up a wicket with his first ball, Ben Hancock taking a smart low catch to his right.

Despite some lusty hitting from Nasser Satti, who finished not out with 33, Harpsden continued to look dangerous.

Toby Stevens wrapped-up the victory with successive deliveries in just the 37th over.

On a track which had variable bounce, the visitors were put into bat and were soon struggling against the pace of Scott Taylor, who took 3-35 and Henry Graham, with 1-13.

With wickets tumbling, Mithun Sortur was brought into the attack. He had been a late addition to the Hurley side but responded with figures of 6-30.

His cutters sliced through the Pinkneys line-up, despite a valiant stand between Khan, with 15 runs, and Akhtar, who added 22 to the their total.

Khan fell when he lofted Sortur to Bhagwani before Akhtar lofted the ball to mid-on to leave the side all out for 79 inside 32 overs.

After the break, Bhagwani fell for two runs while Simoes was caught at slip and Sharma and Graham were dispatched leg before without troubling the scorers.

Hurley was soon 17-5 and it took a partnership of Steve Taylor, with 27 runs, and Sortur, with 37, in an unbeaten stand of 62 to see their side home.

HARPSDEN 2nds won the toss and elected to bat first in this top of the table clash against WINCHMORE HILL in Division 3.

Sasha Burgess and Liam Eslick put on 54 runs for the first wicket against a strong opening attack of Pearce and Clarke who were able to extract good movement from a pitch.

Run-outs accounted for both Eslick and Matt Hand, and when Graham Braithwaite was trapped in front by Clarke, Harpsden were struggling at 72-3 after 22 overs.

Ollie Heath joined Burgess and they slowly added to the score, reaching 91-3 at the half-way point of 26 overs.

After drinks, Heath opened his shoulders to help raise the run rate and the partnership reached 110 before Burgess was bowled by Bell for 65.

Ed Birkett joined Heath and they put on 45 in five overs before Birkett holed out.

The lower order then struggled, losing five wickets for 20 runs until Rod Birkett joined Heath and they put on 20 runs in 11 balls before Birkett was bowled by Bakkes trying another heave to leg.

Heath finished not-out on 104 runs, his maiden century, as his side set a target of 248 to win.

Winchmore’s reply was restrained as the Harpsden bowlers bowled well on a pitch which by this time had flattened and were able to take regular wickets. A hostile spell from Jonnie Howorth tested the Winchmore batsmen but with the odd difficult chance going down and a large number of lbw appeals being turned down, Harpsden couldn’t secure the win and the visitors held on for a draw.

HURLEY 2nds took a weakened side to PINNER 2nds but maintained their unbeaten start in Division 4.

The hosts won the toss and elected to bat, condemning Hurley to take the field with only nine men for the first 11 overs. Despite the lack of numbers and a fast outfield, Hurley kept a lid on the run rate with 50 runs being scored from the first 10 overs.

Kuldeep Nothey was unlucky not to pick up the wicket of Simon Pilsbury in his second over when the batsman toe-ended the ball to Mike Walton behind the stumps, but stood his ground and was adjudged not out.

The arrival of Mo Basharat after 11 overs filled another gap in the field and helped slow the run rate.

The score had reached 64 in the 12th over when Mike Cole trapped Fells leg before.

The next over saw Nothey get a leg before decision in his favour against Pilsbury and a wicket for Alexander Williams, thanks to a diving, one-handed catch in the covers from Josh Cole saw the hosts reduced to 73-3 after 18 overs.

But Nevan O’Sullivan, who scored 47 runs, and Cyrus Barrett, who top-scored with 95, added 83 runs for the fourth wicket.

The introduction of Basharat to replace Nothey paid dividends with two wickets in consecutive balls to dismiss Sullivan and Mahendran. As the fielders tired, Rissen and Barrett accelerated, adding 126 in 17 overs.

Liam Cole made his league bowling debut with a spell of five overs, conceding 24 runs. Once the score passed 250 in the 47th over, a declaration was expected but wasn’t made, which probably cost Pinner their chance of victory.

Howard Mansell came on to pick up the wicket of Barrett, bowled via his pads five runs short of his century. The declaration finally came in the 51st at 289-6.

In reply, Hurley lost opener Clive Williams in the second over for one run, slapping Downer to Mahendran in the covers.

Nothey then joined Mike Cole at the crease and together they added a patient 29 in 13 overs before Nothey was bowled by Rob Bonneywell for 14. Abdullah Ali looked solid in a partnership of 50 in seven overs but another loose shot was caught low down by a substitute fielder, off Rob Fells.

Josh Cole then failed to pick Bonneywell’s googly and lost his middle stump, bringing skipper for the day Walton to the middle. But he went leg before off Bonneywell in the 36th over to give Pinner a chance of victory.

But Basharat, who finished not out with nine runs, and Cole defied the bowlers until the penultimate delivery when Cole lofted Rissen to Mahendran, falling six runs short of a century. The match ended in a draw with Hurley on 159-6.