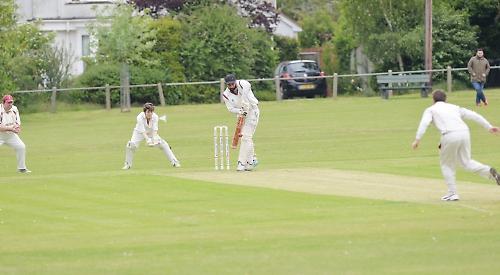 A 98-run knock by Fergus Nutt was not enough to help PEPPARD STOKE ROW avoid losing their perfect record in the Premier Division as they slipped to a 35-run defeat at title favourites SULHAMSTEAD.

The home side’s openers, Steve Belcher and Ryan Brown, shared an opening stand of 66 after being put in to bat. But when Dion Sampson claimed a brace of wickets and Dan Hayden brought a run out, Sully fell to 99-3.

Shiva Aruna, who hit 57, was then caught by U16 debutant Will Atkinson to bring his side back into the game as Sully ended on 212-6 after their 45 overs.

Peppard’s reply started disastrously as Andy Watts was adjudged lbw and, when Rich Ashton and Richard Walker were snared in the slips off Matt Gill, the visitors were 35-3.

Hayden made 33 and Nutt added 60 for the fourth wicket until the latter was given out lbw to Aruna. When Atkinson’s fellow U16 debutants Dan Bacon and Danny May fell, Peppard were 124-6.

Matt Hopper was caught on the boundary during a triple-wicket over by Phil Braithwaite, leading Nutt to launch the same bowler for back-to-back maximums in his next over.

The opener was the final man to fall for 98, caught at long-off by Ryan Brown, leaving Peppard short on 177.

Ruislip elected to bat at Woodcote, their late arrival costing them eight penalty runs, and the hosts looked in good shape as the visitors were bowled out for 114 in 30 overs. Jaimee Jose was the pick of the Woodcote bowlers with
4-31 while Paul Knox and Mark Pearson claimed two wickets apiece.

Unfortunately, Woodcote’s recent batting frailties returned to haunt them and they were soon reduced to 33-6. But a 40-run stand for the seventh wicket between Stefan Gordon and Ryan Van Heerden put them back in with a chance. When they were out, the innings soon ended in 24 overs, all out for 90.

In Division 1, PEPPARD STOKE ROW 2nds failed to put up much of a struggle against SULHAMSTEAD 2nds at the Les Clark Oval in their clash.

The hosts were put into bat and although eight batsmen reached double figures, none went on to create a pivotal innings and the 40 in the extras column was the top score in a below-par total of 169.

Sulhamstead both caught and bowled well and Gurung created turn and bounce which returned figures of 5-27.

Peppard’s malaise for the day continued with the ball as Sullies captain, Matt Benham, ended with 68 not out as the visitors cruised home in 35 overs.

Bowlers Proudfoot with figures of 3–52 and Jackson with 1-28, were the side’s only successes.

Elsewhere, visitors CHECKENDON found the GORING bowling too much for them, with Peter Slade and Ollie Carrier producing movement in the air and off the pitch.

Further hindered by a back injury to opener Manpreet Singh, who still reached 48, Checkendon were dismissed for 155 in only 37.1 overs.

Slade was the pick of the bowlers, returning figures of 4-26 while captain Carrier contributed 3-34.

Despite a determined spell of bowling from Vikas Chib, Goring had little difficulty in reaching their target from 36 of the 52 overs available, thanks to solid contributions from Steve Haynes with 24, Steve Wincott, with 40 and Carrier, with 46.

In Division 3, U14 Daniel Watts claimed 3-33 for PEPPARD STOKE ROW 3rds but couldn’t prevent his side slipping to an agonising one-wicket defeat at SANDHURST 2nds.

Dom Hall was the principle run-scorer with 66 as the visitors amassed 188. Mark Lambert, with 25, James Hern, 25, and Pradeep Kumar, 21 also chipping in with useful cameos.

Peppard then made a dream start when U16 Josh Smith knocked over Parv Panesar for a duck, but the experienced Andrew Birch and Kevin Speakman redressed the balance for the home side.

Rob Dyer and Mick Chard proved economical for the visitors, but Dan Chesterman’s 59 ultimately proved match-winning, despite the best efforts of the youthful Watts with 3-33 and Smith with 2-47.