Whittaker hits half-century as Taplow are put to sword 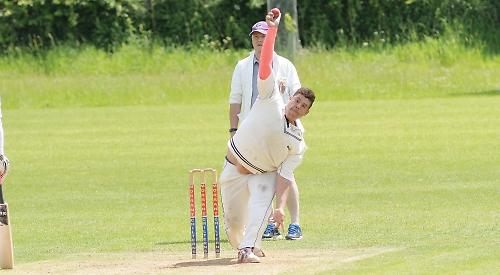 Toby Stevens then found his rhythm and had Grist trapped lbw. This brought Lincoln to the crease who showed his intent from ball one, stepping down the crease and finding the boundary regularly.

Franklin and Tom Hancock duly removed the top and middle order with Lincoln running out of partners. Newman stayed with Lincoln for several overs before he was bowled by Hancock for 4. Khan came in and made a quick fire 39 to help Taplow post a score of 159.

Harpsden started slowly with the Taplow openers bowling well and on a pitch which favoured the bowlers. Cary went in the eighth over, Imlay and Will Stevens batted well to get up to 49 off 16 overs, before Imlay was out lbw to Court.

Skipper Whittaker joined Stevens and found batting difficult and weathered a quiet spell of 24 dot balls in a row which included the demise of Stevens for 26. Brown came in at number five and scored quickly before lobbing the ball to cover for a well made 32. Whittaker finished the innings on 50 not out to get Harpsden over the line in the 39th over.

HURLEY ground out a draw at BINFIELD 2nds in their Division 2 clash after the home side had won the toss and posted 244-9 from 50 overs.

The Hurley seamers struggled to find a good length and anything short was dispatched to the boundary. Lunnon and Jeffrey added 49 in quick time before Scott Taylor made the breakthrough.

Reid joined Lunnon to add 55 but the introduction of the slow left arm of Phil Ridgeway clawed back the match as Lunnon lofted to mid-off where Arshad took a good catch. Henry Graham took some punishment but clipped Reid’s off bail as Hurley got back into the match.

Binfield slipped to 155-6 as Ridgeway took out the middle order before a partnership of 63 between Nower and Nicholls propelled Binfield to 218. Scott Taylor bowled Nower but the home side were able to declare on 244-9 after 50 overs preventing Hurley from gaining maximum bowling points.

Binfield opened with the old ball and Goddard and Khanna nailed Hurley firmly on the back foot as Arshad edged to slip and Scott Taylor was bowled by Goddard.

Hurley were 14-2 from the first 10 overs and the reply in disarray. Varun Sharma launched a counter attack before edging behind as Goddard extracted maximum from the track. Dave Simoes stood resolute and with Steve Taylor added 45 for the fourth wicket but any hope of challenging the Binfield score had disappeared as runs became a premium.

Henry Graham added to his growing reputation with a lively innings as Hurley moved to 116-6. Goddard returned to pick up his wicket as Binfield turned back to spin to secure maximum points.

Simoes’ vigil ended eighth wicket down but Joe Richardson and Alan Morgans saw out the final nervous three overs to take Hurley to the draw at 160-8.

HARPSDEN 2nds produced a strong all round performance against BRAYWOOD 2nds to consolidate their position at the top of Division 3.

Braywood won the toss and after electing to bat on a slow, grassy pitch struggled against the Harpsden seam attack of Rod Birkett, James Paice, Ed Birkett and Matt Hand. Their struggles were so pronounced that they only reached 49-2 at their halfway stage of 26 overs where a par score always looked to be something in excess of 200.

Some good bowling from Kei Pohl and Joe Cooper on their Harpsden debuts also contributed to Braywood’s sub par score although some aggressive hitting from Craig and Johnson helped to get Braywood up to a respectable 189-7 off their 52 overs. Ed Birkett took 2-25 off his nine overs whilst Rod Birkett finished with 2-28 off his 15 overs.

Harpsden openers, Graham Braithwaite and Ed Andrews put on 49 for the first wicket before Braithwaite was out to a Yorker by Safwan. Ed Andrews continued where he had left off the previous week and looked set for a second consecutive half century before he was bowled by McDermott off a bottom edge for 49.

This brought South African Carl Pohl in to join Australian Matt Hand and after some careful consolidation, they accelerated to ensure Harpsden got home with four overs to spare. Both Hand and Pohl scored their debut league half centuries for Harspden to ensure an eight wicket win.

HURLEY 2nds kept up their unbeaten start in Division 4 with a four wicket win over the newly combined team of AMERSHAM HILL/THE LEE 2nds.

On winning the toss Mike Walton asked the visitors to bat first against an opening attack of Ken Fuller and Kuldeep Nothey who conceded only 40 runs between them in 30 overs. Nothey proved almost unplayable with only nine scoring shots off him in 15 overs.

When Hedley fell in the 40th over there were only 32 runs on the board, mostly extras. Boakes played a couple of aerial drives down the ground off Fuller, virtually the only attacking shots in the first dozen overs. Steve Pain could only manage a couple of runs before lofting Fuller to square leg, where Abdullah Ali held the first of two catches.

Tony Blakely hit his second delivery to James Calliss at mid-on while another catch by Ali saw the end of Boakes. At the drinks break, the visitors had put on 55-4.

The first ball after the interval saw the back of Jordan Essex, stumped by Mike Walton, off Fuller. Hurley kept their openers going in an attempt to run through the visiting side’s line-up, but some dogged resistance from Andy Knott and James Newbury kept their side in the match with a century partnership for the sixth wicket.

Knott rode his luck, dropped at slip by Clive Williams off his son’s bowling, dropped in the deep by Yasir Gul off Jeff Dawson and surviving an appeal for lbw by James Calliss.

When the opening bowlers finished their allotted overs, Hurley turned to their youngsters who all put in creditable performances. Hassan Gul picked up his first league wicket, beating Knott in the flight to give Walton his second stumping. Set a target of 186 in 48 overs, Hurley were given a solid start by Clive Williams and James Calliss with an opening stand of 44 in 15 overs.

Williams was Yorked by Boakes and Calliss was bowled by a double bouncer from Blakely. Yasir Gul joined Abdullah Ali in a partnership of 87 for the third wicket to put Hurley in a good position to push for victory.

Boakes returned to dismiss both batsmen, leaving the hosts requiring 36 from the last 10 overs with six wickets in hand. A useful cameo from Dawson took his side to within 13 runs of victory before he went back to a full length delivery from Blakely, losing his off stump.

When Ken Fuller skied Walsh to the keeper, there were still six runs needed but skipper Walton and Nothey saw their side home without further alarm with a couple of overs to spare.