Checkendon have the upper hand in draw with unbeaten Mortimer 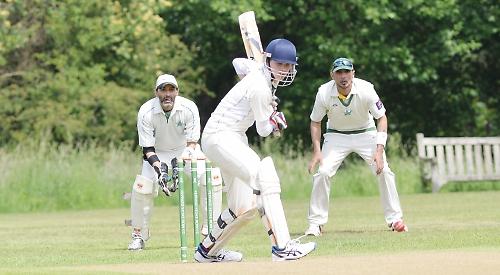 Hosts Peppard Stoke Row made a solid start as Andy Watts and Richard Ashton put on 58 for the first wicket, but when they were joined by Dan Hayden in falling on that total, the visitors had seized the initiative.

Sam Fooks was caught behind on the rebound from first slip, but Phil Duncan played some entertaining shots until he was bowled by Waleed Choudry.

Dan Bacon and Alfie Clifton both followed, but a stirring counter-attack from Matt Hopper (37 from 21 balls) hinted at the possibility of the hosts posting a competitive total.

However, after Michael Chard fell victim to a slip catch by Zafar Ali, Hopper was bowled and Dion Sampson swiftly followed, the hosts were all out for 148.

Clifton removed the dangerous Rehan Akram with the first ball of the second over, and he and Hopper proceeded to bowl a good opening spell which failed to gain their just rewards, repeatedly passing the edge on both sides of the bat.

U16 Will Atkinson collected the prized scalp of Adam Davidson to record his first top-flight wicket, but a fine innings from Ali ensured the champions reached their modest target in 37.4 overs.

Elsewhere in the division WOODCOTE’S poor start to the season continued as they slumped to their third consecutive defeat against BERKSHIRE COUNTY SPORTS.

On a pitch of unpredictable bounce both sides struggled with the bat. Woodcote bowled and fielded well to dismiss the home side in 40 overs. Pick of the bowlers were Paul Knox who took out the top order and Jaimee Jose who removed the tail. There was some good catching as well, most notably by Paul Knox who held three and Stefan Gordon who claimed two.

Woodcote were soon in trouble with the bat, but with Graham Furber hitting a half-century and Stefan Gordon batting sensibly a win looked possible until these two were out and the tail collapsed to give Berkshire County Sports a comfortable win.

Consistent batting took the home side to another substantial total of 269-7 thanks to an opening partnership of 90 between John Acland-Hood and Ujwal Tikoo. This was followed by a 108 run stand from top scorer James Allaway, whose 96 included three sixes and 13 fours, and Jim Warren.

A half century from visiting opener Gavin Stamp set up a potential run chase backed up by some powerful hitting from Steve Audsley but Checkendon off-spinner Rama Adigantla took four wickets to leave Mortimer West End hanging on with two men standing and 61 runs behind after Audsley was dismissed by a diving catch from stand-in wicketkeeper Matt Heslop.

PEPPARD STOKE ROW 2nds came away from WEST READING 2nds with the better of a draw on a hard pitch which proved to have variable, mainly low, bounce.

The visitors were asked to bat first. This brought instant results as Gerry Bacon left his first delivery which went on to clip his off stump. Don Townsin and Richard Walker added 60 for the second wicket but both were out in successive Inshaf overs.

Charlie Laing and Olly Nicholson compiled 68 runs and then both were out in successive Saad overs as the visitors lost wickets in clusters. Marcus Laing added 41 supported by Adam Lotery but the eventual 214 looked well short of par.

In the reply, Jacko took two early wickets, adding a third later as he bowled straight through his 12 overs, conceding only 28 runs.

The hostslooked well in control of the run chase with Emad (34), caught in the deep by Olly Nicholson and West Reading captain Usman 50 not out to a direct hit by Charlie Laing who then repeated the dose later with Wasim.

Suddenly West Reading were 160-6 and the visitors were back in the game and in a tense finish in stiff rain Peppard Stoke Row finished with a 29-point winning draw.

Elsewhere in the division GORING were on the wrong end of a draw in their clash at IBIS MAPLEDURHAM. The hosts, having won the toss and electing to bat, put on 253-5.

In reply Goring held on with one wicket to spare as they closed on 202-9 with Toby Winterbottom top scoring with 48.

Meanwhile a fine innings from James Hern was not enough to prevent PEPPARD STOKE ROW 3rds from losing by three wickets to WEST READING 3rds.

On another good home wicket all of the Peppard Stoke Row top order made starts, with Hern top scoring with 59. Opener Hugh Asquith continued his fine form with 30. However, despite captain Rob Dyer making 17 late on, the home side were restricted to 190-8.

Taylor Vines snared an early victim in the West Reading reply while U14 Owen Simmons produced a peach to bowl Ghalib Hussain.

A useful third-wicket stand between Imran Zaman and Kaseem Ali redressed the balance, and despite Dyer bagging a brace and Matt Kimber and Vines collecting further victims, Ali’s unbeaten 53 proved decisive in helping his side home with 7.5 overs to spare.