Nugent's six-wicket haul not enough as rain wins the day 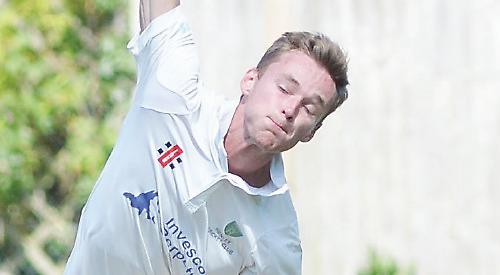 IT was a case of déjà vu for BERKSHIRE when they took on CORNWALL in the Unicorns Championship this week.

Last season at Grampound Road only one day’s play was possible due to bad weather, but Berkshire still ended it in full control of the game.

And on Tuesday they looked to be well on their way to victory when rain brought a premature end to their opening three-day fixture.

Berkshire, all out for 267, dismissed Cornwall for 191, having been 52-5 at one stage, and had them in serious trouble in their second innings at 104-6, a lead of just 28, when the game at Wargrave was abandoned as a draw.

As he did in last summer’s game, Tom Nugent again provided the ammunition for Berkshire to blast their way through the Cornwall batsmen, taking 6-61 off 18 overs.

Henley’s paceman twice had to leave the field to receive attention for a badly cut finger on his left hand, but it did not affect his bowling.

Ollie Wilkin captured 2-29, while the other two wickets were shared by Chris Peploe, who took 1-35 in a marathon spell of 27 overs, and debutant Harry Jordan, the Windsor Grammar School pupil who plays for Henley 2nds, returned 1-28.

In reply, Berkshire soon lost Henley’s Waqas Hussain (4) and Billy Rogers, for the same total, but Wilkin and Henley’s Richard Morris lifted the total from 31-2 to 95-3.

Morris and Dan Lincoln added 101 for the fifth wicket before the latter was out for 62 which came off 110 deliveries. With Nugent contributing 21, Berkshire finished on 267, a lead of 76.

Left-arm spinner Andy Libby was the pick of the visitors’ bowlers, taking 5-59 off 27.3 overs.

Cornwall then proceeded to lose four wickets before wiping out their deficit, with Richard Morris running out Adrian Noott for one before Wilkins captured two more wickets and Peploe one.

Skipper Matt Robins and Adam Hodgson stopped the rot, taking the total to 86-4 by close of play on Monday.

Torrential rain followed on Tuesday, but following tremendous efforts by the Wargrave ground staff to mop up the square, play eventually got under way at 3.40pm.

Nugent had Hodgson caught at slip by Lincoln for 15 and Wilkin trapped Robins lbw for 44, leaving him with figures of 3-38. However, only 11 overs were possible before more heavy rain led to the captains shaking hands to end the game.