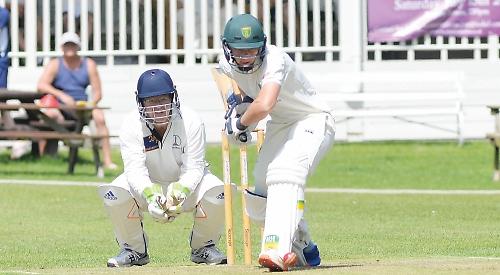 HENLEY 2nds crashed to a three-wicket defeat against FALKLAND at the Brakspear Ground last Saturday in their Division 1 encounter.

Batting first the hosts were in trouble early on as they lost opener Tom Oldershaw for a duck. Number three batsman David Allaway came in at number three and added 26 runs before Nick Goodson departed.

Will Legg (39) joined Allaway and the pair put on a 127 run partnership before Legg was dismissed lbw with the score on 154-3. Allaway departed six runs later on 94 to another lbw decision.

Michael Williams remained undefeated on 38 runs as Henley lost a further four wickets as they finished their 50 overs on 248-8.

In reply the visitors looked in trouble at 60-2 but a 97 run partnership between Jim Ettridge and top scorer Paul Jenkins (73) saw the score progress to 157 before the former was run out.

Falkland continued to put on the runs despite losing several wickets and they reached their target of 250-7 with 14 balls remaining.

KIDMORE END ran out 83-run winners at HAYES in their Division 2A clash. James Frost won the toss and chose to bat first on a dry and mottled pitch.

Batting first against two opening bowlers who were swinging the ball a great deal in the conditions, the two Jakes, Easton and Leach, batted in contrasting styles. Easton chanced his arm, whereas Leach was more circumspect. Neither method fully paid off as both were dismissed before the score had passed 20.

It would take leading inform batsman Ashby and stalwart Jeff Sheldon to rebuild the innings. They both tried to pick up ones and twos where ever they could, with good placement of the ball, and unleashing more aggressive shots with force when the bowling was wayward.

The heat started to affect the bowlers and as the innings progressed and the ball got older the bowling became less accurate, providing more scoring opportunities. The duo put on 105 for the third wicket, when Sheldon was out. Ashby was out shortly afterwards.

Zac Leonard drove the seamers, swept the spinners and pulled any short bowling with ferocity scoring a rapid fire 41 from 43 balls, before he was well caught at midwicket.

Kidmore started to score more quickly and with 10 overs left in the innings the score was 150-4. A series of short sharp partnerships with good striking of the ball meant the team would add 90 runs in the last 10 overs as Tom Bodeker, batting at number seven hit 29 runs from 32 balls.

The best innings of the day, despite not being the highest score, was Calem Taylor’s uncompromisingly uncomplicated batting as he hit 24 from 18 balls as Kidmore closed on 239-6 at tea.

Momentum was with Kidmore as a wicket fell in the second over thanks to a good stop from Leach at point that was deflected to his team mate Grant, who threw accurately to Leonard, who swiftly completed the run out.

Two overs later Frost struck with a sharply rising ball that left the batsman; the edge was smartly seized upon by Leonard to leave the hosts on 13-2.

P Singh instigated a brief counter attack with some brutal hitting striking boundaries and a six off Frost.

The ball then started spitting viscously off a length as Frost took three quick wickets. He removed Singh when the batsman ballooned the ball upwards off his glove after the ball bounced and surprisingly, Frost sprinted forward and dived to take a one-handed caught and bowled. He repeated the same trick with the next wicket as Johal was dismissed in a near identical fashion as Forst secured his fourth wicket to leave Hayes on 49-5.

Emmanuel then took his first wicket of the game as Jake Easton caught a steepling catch.

A recovery led by Momi followed as he batted with more determination than the batsmen above him. Sheldon was unlucky not to have dismissed him during his four overs and Hayes recovered to a more respectable position of 90-6.

The off-spin of Taylor helped to wrestle back the momentum towards Kidmore, trapping a batsman lbw. Sheldon and Ashby then chipped in with a wicket each and by this time the ball was spinning prodigiously. The score was 117-9 by the 25th over.

Some last stand bit hitting by Momi, who finished 65 not out, and number 11 Madial, made the score a more respectable 156 when Frost took his fifth wicket of the day to finish the game off and help Kidmore to an impressive victory.

WARGRAVE remain top of Division 3A following their eight-wicket away victory against PURLEY.

The hosts, batting first, were bowled out for 172 with T Greatwood taking 5-49 for the visitors. In reply M Sohi top scored with 72 as Wargrave eased to 175 for the loss of just two wickets in under 25 overs.

Elsewhere in the division WARGRAVE 2nds’ clash with CHISWICK AND WHITTON 2nds was abandoned. Chasing 287-4, Wargrave were on 238-7 when the match was brought to a halt.

KIDMORE END 2nds comprehensively defeated MAIDENHEAD AND BRAY 3rds by 136 runs in their Division 7A clash at Gallowstree Common.

Having won the toss the home side batted first and suffered an early setback with the loss of skipper Chris Pigden for 9 with the score on 15. Cameron Livingstone-Smith then joined Mark New and they added 60 for the second wicket before New was out for 24 skying a big shot off visiting skipper Tom Allen and with the dismissal of Will Patey soon after Kidmore were in a precarious position of 80-3.

Azhar Udeen joined Livingstone-Smith and they set about rebuilding the Kidmore innings which they did with a mixture of sensible running and boundaries. The partnership was built up with both passing 50 and their shot selection complementing each other perfectly with Udeen hitting good straight drives and deft sweeps and Livingstone-Smith playing some exquisite shots through the covers and chips on the leg side. The pair had added 163 for the fourth wicket when Udeen was bowled off his pads for a 84 with the total on 243 in the 40th over. Livingstone-Smith then moved on to his century which was accomplished in the 42nd over and with a cameo 14 from Greg Clark Kidmore declared in the 40th over with a total of 283-5, Livingstone-Smith finishing on 109 not out.

Maidenhead and Bray made the worst possible start losing a wicket in the second over to Nathan Ruegg. There then followed Bray’s best passage of play for the day as Nick Clements and Warren Blackett added 51 for the second wicket before Clements was bowled by AJ Raina for 24.

Blackett followed soon after with the Bray score on 58-3, also bowled by Raina, as a recovery was then staged by the visitors with 33 being added for the fourth wicket before Udeen and the new ball accounted for Darren Grey.

Kidmore started to work their way through the remainder of the Bray batting by taking wickets regularly a Jake Elliott and Udeen took a further five wickets between them leaving Bray in trouble at 106-8.

A mini revival was then staged by Bray as they looked to try and survive the remaining 12 overs without losing two wickets and giving the home side the win. Phil Cowell, who had made 21 and was doing a good job at resisting the Kidmore bowling, hit a full delivery from Raina to Chris Pigden at cover who held a smart catch.

Further drama followed in the next over from Will Patey as a caught and bowled chance went down from the fifth ball of the over and with dark rain clouds swirling over Gallowstree Common a reprieve appeared to be on the cards for the visitors. However, the final ball of the over saw Patey trap number nine Murray Goodwin on the pads and he was adjudged lbw to leave Kidmore victorious.

In Division 7B HENLEY 4ths lost out by 32 runs against HIGH WYCOMBE 4ths at Nettlebed.

Kidmore End, batting first, were bowled out for 107 with Wokingham needing just 22 overs to surpass their total as they closed on 108-1.