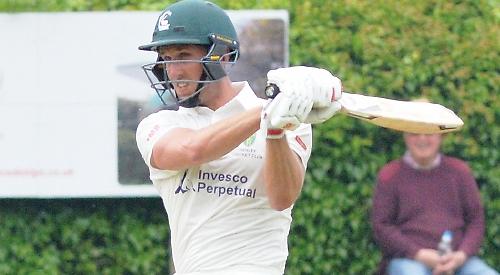 BERKSHIRE are through to the semi-finals of the Unicorns Trophy following a 65-run victory over SUFFOLK at Falkland Cricket Club on Sunday.

They will meet Staffordshire, beaten finalists last year, at Longton Cricket Club, in Stoke-on-Trent, on July 9.

Speaking after the win, Berkshire skipper James Morris said: “We have done well against them in the past, so we will go there confident, but you don’t have easy games when it comes to semi-finals.”

It was his brother, Richard, who proved the match-winner against Suffolk, scoring 125 to help Berkshire post 309-9 off their 50 overs. That total always looked beyond the visitors and they were dismissed for 244 with Richard’s Henley team-mate Tom Nugent taking four wickets.

Having elected to bat first after winning the toss, Berkshire suffered a shock when Ollie Wilkin was trapped leg before wicket to the first ball of the day.

Fellow opener Jack Davies was bowled for 13 and, with Euan Woods falling the same way for 37 and James Morris lbw for 31, this quarter-final tie was looking evenly-balanced with Berkshire 130-4 after 29 overs.

However, that all changed when Richard Morris and Andy Rishton came together.

Richard reached his half-century off 64 balls, but needed only another 31 to reach his century, having been dropped on 94. He deserved that slice of luck, eventually making 125 off 105 balls with three sixes and 11 fours.

Morris and Rishton, who raced to 67 off 52 balls with a six and eight boundaries, put on 126 for the fifth wicket in 16 overs.

Berkshire lost late wickets but their total of 309 left them in a very strong position.

It put the pressure on Suffolk to get off to a solid start, but dangerous openers Jaik Mickleburgh, the former Essex batsman, and Martyn Cull were dismissed for 11 and 15 respectively.

The visitors worked hard to get back into the game and three useful stands saw them reach a promising 230-5 with nine overs remaining.

However, Berkshire didn’t flap and ripped through the rest of the order, with the last five wickets falling for just 14 runs in less three overs.

Nugent took 4-38 off nine overs, but spinner Ali Raja was the most economical, finishing with excellent figures of 1-34 off 10 overs, bowling at a time when the visitors were looking to push the score along.

James Morris added: “Suffolk were the first side to put us under pressure this season, but we never panicked as we are a side with a lot of bottle.”

Berkshire are back in action this weekend, travelling to Abergavenny to play Wales Minor Counties in the Unicorns Championship, starting on Sunday.