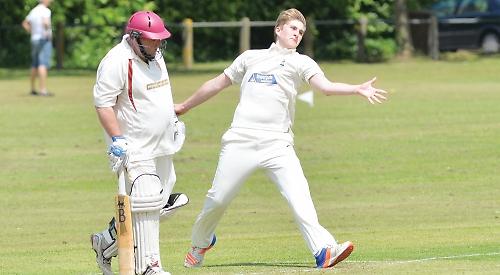 PEPPARD STOKE ROW returned to winning ways with a five-wicket triumph at home to SANDHURST in the Premier Division last Saturday.

James Birch made a brisk 21 for the visitors before he misjudged an in-swinger from Matt Hopper and was bowled and shortly after Alfie Clifton had Sumit Malla caught at first slip by Rich Ashton.

Hopper generated a faint edge to wicket-keeper Dan Hayden to account for dangerman Adam Birch and when Dion Sampson trapped Doug Seeburg lbw, the visitors were in trouble.

Chris Pharo smashed 67 to help Sandhurst back into the contest, but useful spells from Sam Fooks, Sampson, Max Baker-Smith and Fergus Nutt ensured the away side could only reach 164-9 from their 45 overs. On debut, Josh Collins also fielded tremendously for Peppard Stoke Row.

That score looked way under par as Andy Watts and Nutt put on 74 for the opening wicket, only for the former to run himself out.

Nutt and Paddy Hennessy were dismissed by the wily spin of Martin Pharo, and when Baker-Smith was superbly caught by Birch, the game was somewhat on a knife-edge with Peppard Stoke Row on 111-4.

However, Dan Hayden blazed away until adjudged lbw and with Richard Ashton keeping a clear head, Peppard Stoke Row were able to inflict defeat on a side who had started the day second in the table.

WOODCOTE’S poor start to the season continued with a home defeat at the hands of WOODLEY, one of only two teams below them in the table at the start of play.

In recent weeks it has been batting which has been Woodcote’s weakness, but on this occasion they batted well with Jez Mayo leading the way and a good 50 partnership between Mark Pearson and Jonny Aldridge at the end of the innings. The main reason for the five wicket defeat came in the second innings when six dropped catches cost the home side the match. Significantly, Kashif Ali who scored a century for Woodley was dropped three times.

All the Woodcote bowlers returned tidy figures but Woodley won by five wickets with eight overs to spare.

In Division 1 PEPPARD STOKE ROW 2nds crashed to a heavy defeat at GORING.

A steady opening stand from Goring’s Banerjee and Steve Wincott ended when the former was caught by Matt Ravden off junior Will Atkinson with the total on 53. A 50 stand followed with Kulkarni but ended with Wincott well caught by Olly Nicholson in the deep for 84 in an innings that included 14 fours.

Some inroads were made by Nicholson and Will Atkinson but they were unable to suppress George Taylor’s 47 not out as Goring reached 226-8 at tea.

The visitors’ response began badly with Walker misjudging the wily Pete Slade in the first over. Wickets tumbled regularly with only Olly Nicholson, caught and bowled by Taylor, who later bowled the tenacious Matt Ravden for a top-scoring 35, featuring on the scoreboard.

The Peppard Stoke Row innings then crumbled to 96 all out in the 28th over.

Elsewhere in the division CHECKENDON’S resurgence gathered pace with a second consecutive winning draw against a top side, this time at BRADFIELD.

Ujwal Tikoo led the way with a measured half century before a delayed appearance at number five for Manpreet Singh who proceeded to hit 79 in just over an hour.

Sensible support from the middle order enabled the visitors to reach 238-6.

Bradfield began their reply with free-scoring from James Chettleburgh and Ben Hardy but fell away thanks to hostile bowling from Surya Poodipeddi and Vikas Chib.

The home team were forced on the defensive but were able to hold out thanks to Will Nevill’s undefeated 50 although they were still 64 runs in arrears at the close.

Asquith hit 119 not out to raise his average to 198.5 and with the help of Pradeep Kumar and Mark Lambert, Peppard Stoke Row were able to total 239-2 at the end of their 40 overs.

John Humphrey batted gamely in reply, but Peppard Stoke Row were always in the ascendancy and Asquith completed a fine all-round day by taking his 100th league wicket. The returning Roy Hayden took his 924th scalp and U14 Ed Bruun collected his first stumping as wicket keeper.