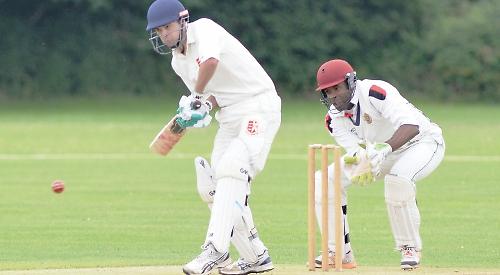 HENLEY 2nds slipped into the Division 1 relegation zone after going down to a 125-run defeat at MARLOW.

Under sunny skies, but with the feeling that the pitch would only improve as the match wore on and a youthful, five-prong seam attack, Henley skipper Wheeler won the toss and elected to bowl.

Early breakthroughs were not forthcoming as the slow pitch and inconsistent lengths from the Henley openers allowed Nawaz and Hogg to make a comfortable start.

Following a mandatory ball change, instigated by the presence of a lone hedge beyond the mid-wicket boundary, Henley’s fortunes changed, as spinners Jacobsen and Kenworthy were introduced, with immediate effect.

Kenworthy removed Hogg and Graham in quick succession, the former lofting a catch to Goodson at mid-off and the latter missing out on a series of full tosses before eventually succumbing to the aerial bombardment and patting one back to the bowler.

This left the match delicately poised at 60-2, with Jacobsen, back after a six-week lay-off, plying his trade effectively and possibly and having a couple of lbw shouts turned down.

The combination of Nawaz (118) and Paskin (70) proved to be the decisive one, their partnership of 172 stifling any chances Henley might have had of restricting Marlow to less than 250.

A late flurry of wickets, two of which fell to Zac Jones (2-32), added a little gloss to an otherwise under-par bowling performance, Marlow eventually declaring on 272-5.

All was not lost as the pitch was true and hadn’t spun as much as expected, so Henley were still confident that they could chase Marlow’s total down. The first seven overs put paid to any hope of a fight back as Henley’s top order was skittled by the probing combination of Brzezicki (2-33) and Graham (4-34).

From 15-5, Jones and Homewood attempted to rebuild, Jones in particular striking some lusty blows straight down the ground. After his dismissal, caught at mid-on for 34, Jacobsen took up the mantle and struck the ball cleanly for 27 before being dismissed in an identical manner off the off-spin of Dozell. Harry Jordan came and went, and once Homewood (46) had had his stumps rearranged by a Yorker from Quamil, the writing was on the wall, Henley all out for 147.

James Frost was in good form with the ball once again as KIDMORE END ran out winners against MAIDENHEAD AND BRAY in their Division 2A clash at Gallowstree Common.

Kidmore lost the toss and were inserted on a flat yet soft pitch as openers Jake Leach and Tom Sheldon put on 37 for the first wicket. After Leach was bowled the brothers Sheldon added 16 more runs before Jeff Sheldon was caught.

Opening bowlers Grover and Becker were making good use of the swinging conditions and bowled long spells, thanks to the return to the traditional format of the game with no limits on bowlers.

Tom Sheldon and Guy Ashby attempted an aggressive approach to prevent momentum swinging too much in favour of Maidenhead and Bray, but this was unsuccessful and Tom Sheldon was caught by Kieran Grey behind the stumps for 31.

At 62-3 Kidmore End were wobbling but as the bowlers tired Jake Easton and Guy Ashby were able to punish anything loose. The long spell of bowling took its toll on Grover who had to come off in his 15th over with a hamstring pull.

Easton was eventually dismissed after hitting 49 from 70 balls as he and Ashby put on 115 for the fifth wicket. The break in this partnership saw a lull in scoring as the visitors started to restrict run scoring and with Oscar Fountain initially struggling.

Vice-captain Ashby took some pressure off of his young partner, as he hit the ball through the covers in the process restarting the run rate. This inspired Fountain who then followed suit, until he was caught and bowled by Murtaza.

Bodeker joined Ashby with the score on 229-5 and faced only a few balls as Ashby farmed the strike to help the team to 246-5 from 52 overs, and himself to an unbeaten 92.

In reply skipper Frost set up a defensive containing field as he opened the bowling with two spinners using the old ball. Whilst this made the total for the visitors to chase harder to achieve, it did not have the desired effect of taking wickets due to batsmen’s impatience and after 15 overs from a combination of Faroqi, Ashby and Taylor the visitors were a comfortable 45 without loss.

Frost took the new ball himself, bowled Cunliffe on a no ball and also brought veteran Jeff Sheldon on to bowl and he made the crucial breakthrough trapping Rodger lbw for 19 with the score on 56.

Despite this wicket the visitors continued to bat well, even though Frost bowled batsman number three for just two runs, with a ball that cut back sharply up the hill.

Emmanuel came on to bowl but this did not bring reward for Kidmore End and the batting side had regrouped to 137-2. Ashby was reintroduced to the attack and struck with his first ball, he then took a second wicket shortly afterwards thanks to a well taken catch by keeper Tom Sheldon making the score 149-5.

Frost brought himself back on to bowl, this time with the wind behind him and he struck immediately snaring his opposite number, whose concentration seemed to have have been broken for a split second. Cunliffe scored 73 from 90 balls but none of his team mates batted with the same application.

Frost blasted through the lower order batsmen who left straight balls to be bowled. Ashby chipped in with another wicket, and batsmen six, seven and eight and 11 were all bowled by Frost.

Maidenhead and Bray collapsed from 149-5 to 178 all out as Kidmore triumphed by 68 runs.

Division 3A league leaders WARGRAVE held on for a draw in their home match with COVE 2nds.

Batting first the visitors were dismissed for 207 with Jack Clark returning bowling figures of 5-36 and Razwan Hanif 3-64 for the hosts.

In reply Wargrave found scoring runs hard to come by with Madip Sohi top scoring with 39. Matt Farr done most of the damage for the visitors with 6-43 but with one wicket remaining Wargrave held on to secure a share of the spoils at 148-9.

Prakash Gurung was in fine form with the bat as HENLEY 3rds triumphed at FALKLAND 3rds by 46 runs.

Henley won the toss and elected to bat first with openers Andy Hester and John Neville quickly returning to the clubhouse, followed by Nathan Hopkins. At 18-3 the pressure was on Henley but Gurung and Alex Johnson took control of the game as runs came quickly. The partnership of 108 gave Henley the ascendancy as Gurung hit 103, showing a full range of shots in a classy innings.

Johnson ended on 64 while late cameos from Hary Manoharan and Nigel Dunstan left Henley on 265 all out.

Nick Johnson and Nigel Dunstan set to work to get early wickets and with Falkland trying to force the score early on, chances came. Andy Hester took a catch at first slip while Johnson followed up with another wicket, taking out the batsman’s stumps.

Dunstan struck with a fine grab from Hopkins, at gully he dived backwards low to the left of him to take a stunning catch.

Falkland kept going for shots and with the ball always in the air, Henley took their catches and regular wickets. Dunstan took a high ball off the bowling of Sean Taylor and Adam Lubbock caught off Andy Chappell to get the wicket of opener Akram.

Chappell took a further two wickets quickly as the Falkland innings fell apart. Hopkins brought himself on to bowl and it was his bowling that finished the game with a hat-trick, Gurung completing his fine match with a diving catch. The last two batsmen tried to swing as hard as possible and Henley in the end strolled to a victory.

Elsewhere in the division WARGRAVE 2nds lost out by 103 runs against league leaders BOYNE HILL 2nds.

Bating first Boyne Hill declared on 243-6 before bowling Wargrave out for 140.

KIDMORE END 2nds had the better of a draw with EVERSLEY 3rds in their Division 7A clash.

Kidmore won the toss and decided to bat first on a flat wicket where opening pair Chris Pigden and Mark New encountered few problems in putting on 78 for the first wicket until New was bowled off the inside edge for 26.

Pigden carried on with his good form and made 52 until he was out attempting to accelerate the score on but could only mishit the ball to mid on. Thereafter the Kidmore middle order of Duncan Grant with 47, including plundering 24 from one over, Callum Driscoll with 38 and the evergreen Greg Clark with 30 not out meant that Kidmore declared their innings closed on 244-6 in the 44th over.

Eversley were soon on the back foot at 10-2 as Azhar Udeen knocked over both opening batsmen.

The Eversley response was built around a 135 run partnership for the third wicket between Dave Howorth who made 54 and Cam Powers with 65 but they were not able to keep up with the required run rate and the innings meandered along. Only with their dismissals from Udeen in his second spell and with Joe Webster bowling a 17 over spell was the game opened up as Eversley lost a few quick wickets.

Kidmore ran out of overs to bowl the home side out as they finished up on 190-7 from their allocated 46 overs.

HENLEY 4ths remain rooted to the foot of Division 7B after forfeiting their match with CHESHAM 4ths. Henley have forfeited five out of their six league matches this season whilst losing their only match played.

WARGRAVE moved to the top of Division 9A without a ball being bowled as their opponents, EVERSLEY 4ths forfeited the fixture.

Elsewhere in the division KIDMORE END 3rds suffered a nine-wicket defeat against YATELEY 4ths. Batting first Kidmore End, who only fielded nine players, were dismissed for 75 runs. In reply Yateley lost one wicket as they closed on 75-1.