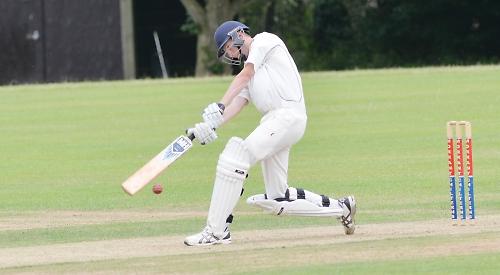 HARPSDEN hit two boundaries off the last over of their Division 1 match at WHITE WALTHAM to run out winners with one ball remaining last Saturday.

White Waltham won the toss and chose to bat on what looked like a decent pitch for batting under cloudless skies. Toby Stevens got the early wicket of Jessop for a duck in the second over of the match before some tight bowling prevented the hosts from getting off to a quick start. The pressure paid off, as Harpsden’s other opening bowler, Tom Hancock, trapped Metherell lbw for 12.

Elliott and Molloy rebuilt the hostss innings with a mixture of watchful and attacking batting as Harpsden captain Whittaker rotated the bowling, bringing on Wright and the ever-consistent Franklin to keep the flow of runs down.

After putting on 53 for the third wicket, the partnership was broken as Franklin got one through the defence of Molloy (40). Elliott batted well for his 79 before being outfoxed by Lyle Heilbron before Parhan was well caught by Franklin, also of Heilbron.

Tight bowling towards the end of the innings from spin twins Brown and Heilbron restricted the batsmen before bursts from openers Hancock and Stevens coupled with some energetic fielding ensured Harpsden were able to restrict White Waltham to an under par score of 184.

In reply White Waltham took the old ball as the Harpsden innings started poorly as Adam Birkett tried to get to the pitch of the ball and was bowled by Salmon. Soon after Sam Imlay was run out and Jack Brown was trapped lbw by Salmon.

After Whittaker was bowled by Mohindru with the score on 72-5 and Cary was removed for an impressive 48 seven runs later, Harpsden needed something impressive. They got it in the form of Franklin and Heilbron who counter-attacked brutally with Franklin planting a six into the beer garden of the nearby pub.

A partnership of 73 brought Harpsden right back into the match, but with just 33 required for victory, Franklin mistimed a pull and was caught for 38 at better than a run-a-ball.

After Heilbron was bowled 10 runs later, it was down to Wright and Hancock to see Harpsden through. With nine required off the last over two fours by Wright ensured Harpsden won by two wickets with just one ball remaining.

Century hero Phil Ridgeway pushed himself up the order to help HURLEY pick up a 31-run home Division 2 win against WRAYSBURY 2nds.

Hurley had decided to bat and lost Imran Arshad in the second over with only 1 on the board. With Dave Simoes more circumspect, along with Ridgeway, the two added 114 for the second wicket in 27 overs before Simoes fell lbw to Alan Freeman.

Varun Sharma was at his best in 46 balls including three sixes while Ridgeway brought up his 50 with a straight six. The third wicket added 71 in 12 overs to take Hurley to 186-2.

Sharma was bowled by Freeman and Ridgeway saw Hurley through to 199 before he edged the same bowled behind. Hurley pressed for a big score but the return of Waqir Afridi scythed through Hurley’s young middle order. Henry Graham, Joe Graham and Josh Cole played some powerful shots but Afridi’s pace and accuracy cut short innings of promise. Hurley saw out their 52 overs to post 237-9.

Wraysbury set about erasing the deficit with an opening stand of 74 in 17 overs. Dave Tooze and Tom Dibley looked well set before a low delivery from Scott Taylor trapped Dibley.

Tooze followed next over as Ridgeway fizzed one and Simoes snaffled the catch behind. Taylor and Ridgeway chipped away backed by some good catching. Mike Cole pouched a sharp catch at slip to remove Ahmed and Simoes dived headlong to remove Allaway first ball after drinks.

At 116-5 the visitors might have opted for the draw, but Mo Nawaz and Afridi battered 57 in seven overs before Henry Graham castled Afridi.

Ross Brown returned from the cow-field end and immediately had Ben Freeman driving at short cover where Henry Graham took a good catch. Brown then had Ahmed caught and bowled, but with Nawaz scoring freely, all results were still possible. Fifteen runs were added for the ninth wicket as the visitors moved to 205-9.

With Hurley needing one wicket and the batsmen looking for twos or boundaries, Nawaz hit the ball through gully. With Imran Arshad at deep backward point, he sprinted towards the ball and a clean pickup and throw saw Simoes whip off the bails to secure Hurley maximum points.

Undefeated Division 3 side HARPSDEN 2nds saw their impressive start to the season continue further thanks to a man-of-the-match display by Will Stevens in their home win against THE LEE.

Captain Sasha Burgess won the toss and elected to field. The decision to bowl was duly rewarded when Rod Birkett took the wicket of Ben Harris for 3 in the second over with a sharp catch from Alex Bradley.

After this initial loss, The Lee recovered well with fine stroke play from both Glasgow and M Harris seeing a partnership of more than 50 stabilise the innings.

The bowling change of Ollie Heath saw some much needed control and additional pace, proving too much for Glasgow with Stevens taking a sharp catch in the slip. Bradley followed up in the next over removing the dangerous M Harris for 34. This dismissal then saw Harpsden regain control through the bowling partnership of Rod Birkett 3-30 and Will Stevens 4-14 reducing The Lee to 158 all out in 46 overs.

Harpsden’s response was a sluggish affair with both openers never getting going, Burgess was bowled for 10 and Braithwaite caught for 12 due to The Lee bowling a consistent line ably assisted by cloud cover. This pressure from the bowlers saw M Hand and M Cooper never look comfortable either with both being dismissed cheaply leaving Harpsden in trouble at 58-4.

With Harpsden reeling this saw Tom Mitchell come to the crease with Will Stevens, with both batting sensibly and patiently punishing anything too short or too full. These two combined well and duly saw Harpsden home with Mitchell unbeaten on 53 and Stevens unbeaten on 32 seeing the hosts home by six wickets.