Grant's unbeaten century stand puts side in hunt for promotion 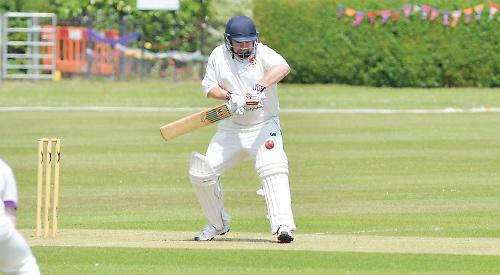 Batting first the Brakspear Ground side looked in trouble at 95-6 before top scorer Cameron Jacobsen (52) and Charlie Home Wood (40 not out) put on an 85-run partnership.

When Jacobsen was out the score had progressed to 180-7 with the final three wickets going for just eight runs.

In reply Stoke Green eased to their target as they reached 191-5 with Ali Nadeem Abbasi top scoring with 100 before he was dismissed by Prakash Gurung, caught by David Allaway.

KIDMORE END crashed to a 10-wicket Division 2A defeat at home to WINDSOR.

Having won the toss Kidmore End chose to bat first and lost an early wicket but a second wicket partnership between Jeff Sheldon and Jake Leach helped the side recover from this early setback.

Leach fell for 38 while Sheldon was given out lbw for 33. This then spark a series of short yet inadequate partnerships as the side went from 83-3 to 148 all out.

The accurate bowling of the injured Chambers, who took an impressive four wickets bowling a long spell in the heat, was complemented by Lazarcuck’s spin bowling who exploited the dry pitch well.

Kidmore lost seven wickets in 54 runs. All the batsmen, from Taylor, Faroqi, Udeen played good shots but were unable to keep out the good balls. Frost was left 14 not out without any partners to bat with the score on 148.

This prove to be a difficult score to defend on a ground with a fast outfield and short boundary.

Windsor’s opening batsmen attacked from the off and despite five bowlers being used none were able to curb the scoring.

Hawkes scored a rapid 86 from 79 balls, and Baumgartner scored 60 from 60 balls to help the visitors to a comfortable victory.

WARGRAVE remain clear at the top of Division 3A following their seven wicket win at CHISWICK AND WHITTON.

Fielding first the visitors bowled the hosts out for 172 with Jack Clark taking 5-39 and Huw Thomas chipping in with 3-23.

In reply Wargrave lost just three wickets as they passed the home side’s total as they posted 173 runs with Mandip Sohi top scoring with 52.

In Division 5B HENLEY 3rds crashed to a 107 run defeat at home to BRACKNELL.

Elsewhere in the division WARGRAVE 2nds went down to a five wicket defeat at home to MAIDENHEAD AND BRAY 2nds.

Batting first Wargrave were bowled out for 194 with Chris Lunn hitting 97 for the hosts. In reply the visitors eased to 196-5 to secure victory.

KIDMORE END 2nds are now just one point adrift of the Division 7A promotion places as they picked up 13 points from their home draw with THATCHAM TOWN 3rds.

Batting first Kidmore End scored 307-2 declared after 37 overs with Duncan Grant top scoring with 155 not out in an innings that saw the number three batsman hit 25 fours and seven sixes.

Opening batsman Chris Pigden also impressed with 11 boundaries in his innings of 59.

In reply Thatcham held on as they closed their innings on 212-6 off 53 overs.