Worsfold picks up fifer to earn side first league win 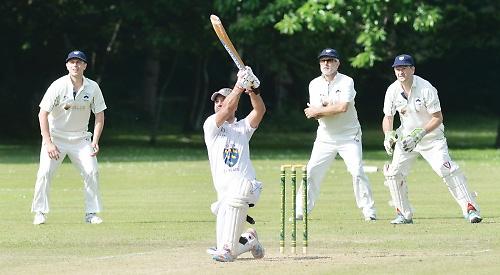 Andy Watts hit 40 runs and Fergus Nutt notched 74 as they shared an opening stand of 104 before the former fell victim to a one-handed catch by Zahid Saddiqi off the bowling of leg spinner Anand Pradu.

Nutt drove a ball which ricocheted off his boot and into the stumps and, with Paddy Hennessy and Rich Ashton being adjudged lbw, coupled with Dan Hayden falling to another one-hander at backward point, Peppard were on the ropes at 148-5.

However, first team debutant U16 Marcus Laing hit 24 and Sam Fooks finished on 36 not out to steady the ship, with the innings ending on 237-7 at the end of their 45 overs.

Peppard decided to take the old ball when it was their turn in the field and it paid off when Hayden took the opening four wickets to reduce Ruislip to 62-4.

Then a fine partnership between Vijay Srinivasan and Prabu put the hosts back in the contest, but Nutt disposed of the latter when the new ball was taken.

Sakhib Bhatti struck three maximums during an enterprising 24, but U16 Will Atkinson continued his emergence into first team cricket by having him caught by Harry Jordan.

Atkinson then took a blinder at short extra cover to give Hayden his sixth wicket and figures of 6-70.

The pair then reversed roles when Hayden pocketed a skier at long on to account for captain Usman Jamil.

The denouement came courtesy of Atkinson with Saddiqi stumped by Gerry Bacon to leave Abingdon schoolboy Atkinson with figures of 3-31 and a seasonal haul of 17 wickets.

With a number of regulars unavailable Woodcote travelled to Crowthorne with a depleted side but a battling performance saw them achieve victory by five wickets.

Captain Ryan Van Heerden won the toss and his decision to field in the heat eventually paid dividends.

After a good start from Crowthorne in which Shakeel Arshad reached his half-century, the innings fell away thanks mainly to James Worsfold who took 5-14 with his off-spin in a seven over spell.

All the Woodcote bowlers played their part with two wickets each for Sam Tucker and Mark Robertson. Ryan Lennard was also back to his best with the gloves taking three catches.

In the second innings Woodcote batted solidly with Ryan Lennard leading the way with a score of 48 runs and, after a good knock by Stefan Gordon, Jez Mayo and Ryan Van Heerden patiently saw Woodcote home with eight balls to spare.

In Division 1 PEPPARD STOKE ROW 2nds went down to a home defeat against promotion-chasing EMMBROOK AND BEARWOOD.

The visitors’ skipper Phil West called wrongly at the toss and Olly Nicholson had no hesitation in choosing to bat.

This looked the right choice as Dominic Hall tore into the bowling. When the openers were parted on 38, his score was 36. He went on to amass 62 (10 fours) in quick time until out caught.

However, none of the following batsmen could maintain this pace, as despite Matt Ravden’s 22 and Roy Hayden’s 18, returning from a serious shoulder injury, Peppard Stoke Row subsided to 166 all out in 43 overs.

Emmbrook’s reply also set off at a serious pace which, despite losing three wickets, including Peppard Stoke Row junior Owen Simmonds’s first senior wicket, Andy Webb’s 96 not out, well supported by captain West with 28 not out, saw them home in the 26th over.

GORING ran out narrow winners in their match at WEST READING 2nds.

Batting first the visitors were bowled out for 234-7 with George Taylor top scoring with 91 runs.

In response West Reading were bowled out for 219 with Peter Slade taking 4-40.

CHECKENDON overcame the hot weather as well as visitors FARLEY HILL thanks to an all-round good display in the field after losing the toss.

Wicketkeeper Matt Heslop ran out topscorer and dangerman Duncan Greeff at a crucial moment as Farley Hill subsided to 145 all out with one ball remaining.

Opener Ujwal Tikoo then led the reply with a well judged 73 which included a six and 12 fours. He also shared a decisive 97-run third wicket partnership with Luke Gray.

There were three late wickets for inswing bowler Nick Timms but the home team reached their target with more than 10 overs to spare.

Peppard accumulated 170-9 in their 45 overs as Hugh Asquith made 41 runs and Pradeep Kumar and Allan May chipped in with 33 and 30 apiece.

The visitors looked in trouble as Welford reached 81-1 in reply with Manu Chadha making 58 runs from 56 balls. However, Chard dismissed the opener with his first ball before going on to take 4-15 from his nine overs, and with U14 Daniel Watts also claiming 3-17, Welford collapsed to 123 all out.

Under 16 Tom Southgate recorded figures of 0-28 from nine overs with his leg spin and taking two catches, while May and captain Rob Dyer added a wicket apiece.