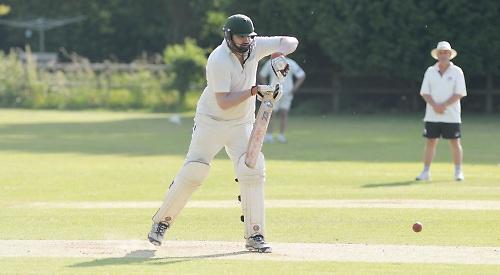 HARPSDEN’S lower order got them out of jail for the second week running last Saturday as the villagers ran out winners in their Division 1 clash at CHALFONT ST GILES.

The hosts won the toss and decided to bat on one of the hottest days of the year. Harpsden openers bowled well, with Hancock removing Lancaster and Power.

Cross (34) hung around with Heaney (39) in the middle of the innings, however both perished to the Harpsden spinners Heilbron and Brown. The spinners and Captain Wright polished off the tail quickly with Chalfont finishing on 156.

Harpsden started badly with Imlay being caught and bowled by Cross in the first over, the leg spin combination of Cross and Gorton bowling extremely well in the first 23 overs removing all of the Harpsden top order with the visitors reeling at 30-5.

Heilbron (48) and Brown (39) rebuilt the innings playing with patience against good bowling. With 13 overs to go Harpsden needed five an over and looked in control until Heilbron was caught on the boundary.

Brown continued with new batsman Hancock, taking singles with the odd boundary. With only three overs to go Harpsden needed 25 to win, and when Brown was caught on the boundary it all looked too close to call.

Ward and Hancock rotated the strike well with a few boundaries in the penultimate over, leaving Harpsden needing nine off the last over. Hancock stepped up with six runs needed off the last four balls and smashed a six over extra cover to win the game for the visitors.

HURLEY failed to come to terms with a slow, low wicket at HOLYPORT in their Division 2 clash and were frustrated with a five-wicket defeat as the home side dealt with the conditions better.

Hurley won the toss and batted first though the home side seemed reluctant to take to the field missing umpire and fielders.

Clive Williams and Dave Simoes trod carefully to put on 24 in 10 overs before Simoes chased a wide one and was caught behind. Phil Ridgeway continued his fine form to shepherd a second wicket stand of 35 before Williams was bowled.

Hurley had a good platform and at 91-2 after 26 overs could look to push on despite the low bounce favouring the shovel over the bat. A clatter of wickets changed the course of the match. Ridgeway pulled to long-on and an easy two, but a freak direct throw saw him short. Arshad skied Vinoth Jayachandran and Steve Taylor barely reached his first ball only to lob it to point.

Hurley failed to put together any partnership of substance with only Shoab Riaz striking the ball fluidly as Hurley posted 182 inside 49 overs. Henry Graham was unlucky to get a shooter and Greg Double fell to a low catch at mid-off.

Imran Arshad bowled a spell of 15 overs despite the privations of Ramadan. Shoab Riaz bowled with pace but without radar as the ball was sprayed around.

Hurley took early wickets as the home side subsided to 26-3 and then 60-4. A good catch from Yasir Gul removed Vinoth but with skipper Duncan Wessels and Sean Miller at the crease the game rapidly went the way of the home side as these two added 70.

Wessels caressed the ball rather than bludgeoning it while Miller employed a more punitive approach particularly as Holyport neared victory and after Ridgeway had trapped Wessels lbw. It took Holyport just 38.3 overs to overhaul the Hurley total.

HARPSDEN 2nds moved to joint top of Division 3 as they inflicted the first defeat of the season on visitors LITTLE MARLOW to maintain their own unbeaten record.

Mahmood and Hassan opened the batting for Little Marlow with Mahmood in good form. Although Rod Birkett and Mark Cooper combined to end Mahmood’s stay after just four balls, Hassan took the attack to Harpsden’s other opening bowler, Andy Bryan and at 37-1 at the start of the 10th over it looked like it was going to be a long day in the field for the hosts and the prospect of chasing a par score of what looked to be about 250.

At this point Bryan changed to a fifth stump line and this changed the match as with great control and dip he enticed both Hassan and Sharif to hit straight into the safe hands of skipper Sasha Burgess at mid-off.

These were followed quickly by Yaqoob who was trapped right in front by Birkett and a fine catch behind the stumps by Jon Stanley, again off Bryan.

At this point Birkett was replaced by Tom Mitchell who bowled with pace and bounce and picked up three scalps, all catches behind the wicket — the first by Jon Harris at short third man and then two by Stanley.

The visitors’ score of 37-1 had become 48-9 with Bryan bowling the leg spinner and it looked as if it was going to be an early afternoon finish but St Maur and Wilson batted sensibly to take Little Marlow up to 76 before the returning Birkett bowled St Maur through the gate.

Bryan was the pick of the bowlers and although his first four wicket-less overs went for 27, his next eight overs yielded four wickets for just six runs and he finished with 12 overs, 4-33.

The Harpsden reply started swiftly as the strong Little Marlow bowling attack was punished for bowling anything loose.

Ed Andrews was deceived by a dipping leg break and was stumped but this left Burgess and Ian Brown to set Harpsden on the road to victory, well before tea.

Brown, after some good touch shots, was bowled by Archie Speirs but Burgess and Mark Cooper saw Harpsden safely home in the 14th over, with Burgess being particularly harsh on anything short or too full.

The game was all over before 3.45pm and Harpsden had reaped a full 30 points.

HURLEY 2nds and Division 4 leaders HOLYPORT 2nd both retained their unbeaten records as they drew at Shepherds Lane. For the first time this season Nigel Haines won the toss and asked the visitors to bat first. Eleven runs came off the first over as Mike Cole struggled to free up his injured shoulder but with Alex Williams bowling well and Cole loosening up, only 20 more were scored from the next 10.

Openers Mushtaq and Edwards didn’t look in any trouble but found runs hard to come by. Kuldeep Nothey replaced Cole and once again showed his value to the Hurley side with a 15 over spell that only conceded 22 runs.

By the first drinks break, Holyport had progressed to 56 without loss. Theo Patrick replaced Williams but was unable to make an impact and was himself replaced by Tom Folkman.

After going for 11 in his first over, Folkman settled into a rhythm and made the breakthrough, bowling Mushtaq who played across the line to a delivery that kept a little low. Folkman then dismissed Edwards to a catch at gully by Josh Cole and Kanti, bowled playing across the line, to reduce the visitors to 86-3.

Three wickets in his first two overs for Haines put Hurley in pole position with the visitors teetering at 107-6. The hosts were unable to press home their advantage as the fielders started to wilt in the extreme heat.

With four catches going down, Tristan Head and Alistair Thompson staged a recovery, adding 78 for the seventh wicket. Jono Patrick got the much needed breakthrough, bowling Thompson with a slower delivery. He then had Head caught behind down the leg side. Good work by Abdullah Ali ran out Sulaman before the visitors declared on 210-9 after 48 overs.

Hurley openers Mike Cole and Jono Patrick made decent early progress, posting 49 in 13 overs before Kanti’s first delivery struck Cole on the back foot giving the umpire an easy decision.

Ali joined Patrick in a stand of 31 for the second wicket, keeping Hurley up with the required rate. Head produced a good delivery to cut in and take Patrick’s off stump, precipitating a collapse as Head ripped through the middle order taking 4-3 in five overs.

Nothey and Ali staged a small recovery with 18 for the sixth wicket before Nothey lofted Head to Kanti. With 101 needed from 20 overs the game was still in the balance. Ali and Mike Walton combined cautiousness with attacking intent to try and keep their side in the hunt.

The conditions took their toll with Ali suffering badly in the heat. With 54 needed from the last six overs, Ali tried to open up and paid the price, dragging on to Varney for a hard earned 62.

With 22 deliveries remaining and 28 runs needed Haines and Walton could only play out for the draw.