Beardall shines with bat and ball as Turville Park triumph 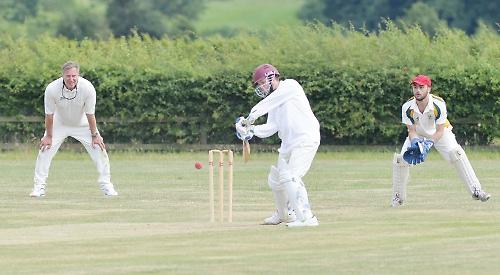 HOSTS CRAZIES HILL fell to defeat against TURVILLE PARK last Sunday thanks, in a large part, to a fine all round display by Beardall.

Having won the toss and elected to field, Crazies started well as Searle removed Wade in his second over to a well taken catch at point by Simpson.

Despite a fast outfield, Searle and Trayte managed to keep the scoring in check. Crazies could have been in an even stronger position if both Paul and White hadn’t been dropped behind off Searle.

Having been given a life, Paul and White took advantage and added 69, before the former was bowled by Dan Hanton for 43. With Sam Montgomery having White caught at point by Simpson in the following over and Hanton bowling Harrisson with one that kept low soon after, Crazies were back in the game, with Turville now 87-4.

Stockings and Markham began to rebuild the Turville innings, before they fell to Simpson and Steve Hanton in consecutive overs. From 129-6, Beardall – despite also being dropped off Searle – managed to shepherd Turville’s tail to a competitive 210-9, finishing unbeaten on 51.

In the face of some accurate bowling, Crazies began their reply steadily as Noyes and his nephew Harry Swift added 77 for the first wicket with Swift reaching his half-century during the partnership. Once Harrisson had bowled Noyes, Crazies collapsed from 96-1 to 138-6 thanks to a combination of rash shots against Briffett and some hostile bowling from Beardall, including the crucial wicket of Swift for 79.

Having begun a mini-fightback, opening bowers Haig and Markham returned and took three quick wickets leaving Crazies Hill to finish well short of their target and suffer a 55-run defeat.