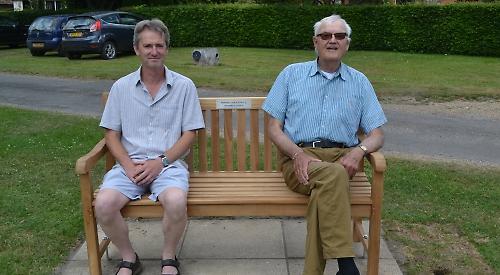 A MEMORIAL bench has been installed in Peppard to honour two stalwarts of the village cricket club.

Peppard Stoke Row marked the contribution of Roy Hayden Snr, from Henley, and Alan Evans, from Sonning Common, who both died earlier this year.

Mr Hayden’s son Roy Jnr and Mr Evan’s brother Martyn, the club’s president, attended the official unveiling of the bench at the club’s ground off Stoke Row Road before their match against Binfield. Olly Nicholson, the club’s honorary secretary, said: “The management committee recognised some time ago that our honorary life members, who were voted as such for their meritorious service to the club, should have some form of remembrance.

“We are grateful to Rotherfield Peppard Parish Council for giving us permission to erect a memorial and it seemed appropriate for us to install a new bench for our spectators to join the others around the ground. We did not expect to have two prime candidates so soon in Roy Hayden Snr and Alan Evans, both of whom gave outstanding service to the club on and off the field.”

Mr Evans said he and his brother had been associated with the club for more than 60 years after their father played for the club when they were growing up in Kingwood in the Fifties. Club chairman Gerry Bacon said: “There is a group of older people who used to play for the club a number of years ago. They are now in their late sixties to early eighties. They come along to matches on Saturday and Sundays, set up their deckchairs on the bank and enjoy the cricket. This bench is to honour their presence at the club for the best part of 50 years.”

The bench was acquired and installed by Ian Halliday, who umpires for the club.