Monk withstands pressure to win the day with leg bye 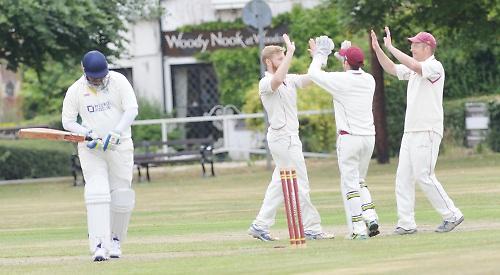 PEPPARD STOKE ROW’S two-match winning streak came to an abrupt halt as they crashed to an eight-wicket loss at home to CROWTHORNE AND CROWN WOOD in their Premier Division clash last Saturday.

Peppard Stoke Row openers Andy Watts and Fergus Nutt were both dropped early on, but the tide seemed to be turning in the hosts’ favour when the latter struck five boundaries in one Jeff Cluett over which included two cover dives.

However, Cluett responded by having Watts caught at slip, Nutt missed a straight one from Razavullah Sheikh and Brett Everett pulled a Cluett bouncer to square leg.

Dan Hayden was then caught at cover and Ash Hayden stumped as Peppard Stoke Row fell from 43-0 to 71-5.

Captain Richard Ashton and U16 Marcus Laing battled to get the home side back into the contest, before both were caught behind cutting.

From 115-7, the Peppard Stoke Row lower order rallied and posted a below par 166-9 score on a good track.

Dan Hayden trapped Julian O’Loughlin lbw early on but Ant Cluett and Richard Barron rode their luck during a useful second-wicket partnership only ended when the new ball was taken and Barron was bowled by Sam Fooks.

However, this only hastened the arrival of Dan Cartledge, whose hard-hitting unbeaten 66 took the visitors to victory with 29 balls to spare.

Elsewhere in the division a 117-run first-wicket partnership between Will Macdonald and Ryan Lennard for WOODCOTE must have had the Welford Park captain doubting his decision to field first. However, visitors WELFORD PARK did claw things back a little as they restricted Woodcote’s run chase thanks to the bowling of father Ian and son Will Herrington.

Welford Park also had a century partnership between Will Herrington and Joe Lawrence and they looked favourites to win at one point, but tight bowling by Will Macdonald led to the visitors settling for the draw, 11 runs short with four wickets in hand.

CHECKENDON were outplayed by visitors IBIS MAPLEDURHAM in their Division 1 clash where bowling attack found movement in the air to defeat the home batsmen.

Out-swinger Richard Pilkington finished with 3-15 in eight overs as Checkendon were dismissed for 90 in just 35.5 overs. Even taking a wicket with the first ball of the innings did little to assist the home side as Chris Webber and James Mollard put on 63, taking Ibis to victory with three men out and 37 overs to spare.

GORING had a narrow one-wicket victory in their home clash with EMMBROOK AND BEARWOOD.

With a bowling line-up bereft of their normal depth, home skipper Adam Ellis took the conservative approach of putting Emmbrook into bat. What came next was a display of probing bowling and good fielding that saw Goring rip through the opposition batting line-up and dismiss them for just 106.

Peter Slade gave nothing away and claimed 4-18 while at the other end George Taylor bowled a devastating spell and despite delivering a plethora of wides he claimed a crucial 4-39. Emmbrook and Bearwood refused to be beaten and took wickets at a steady rate during Goring’s reply. When Chris Walsh (27) fell to the last ball before tea the score was intriguingly poised at 62-4. Three quick wickets with the score on 84 then swung the pendulum firmly in the visitors’ favour with Goring eight wickets down.

However, a fine rearguard action from Ellis and Tom Castle (25) edged Goring close to victory. With the scores tied, the ninth wicket fell and youngster Josh Monk strode to the crease and withstood great pressure to claim the leg bye that gave Goring a memorable victory.

Elsewhere in the division PEPPARD STOKE ROW 2nds had to settle for a losing draw at MORTIMER WEST END.

The hosts won the toss and elected to bat first. Searancke and Stamp added a comfortable 43 until Jason played round an Alfie Burnett delivery. Stamp was joined by Will Bray and they added an untroubled 73 when Bray was caught at deepest mid-wicket by Chris Proudfoot running around from square leg.

Bane added 32 of the next partnership until Burnett claimed his second wicket. Skipper Nick Kingston had a brief life until he was bowled by Jackson. Steve Audsley then scored a rapid 41 not out as Stamp finished a patient 63 not out, with 234 a challenging total on a low, slow track.

Peppard Stoke Row had an equally steady start from Hall and Townsin but both had departed by the 12th over. Matt Ravden played a good hand with 52 in an innings that contained 11 fours but when he was out with the total only 124, the visitors looked destined for defeat.

However, Proudfoot and Roy Hayden were untroubled, adding 76 for the eighth wicket with Proudfoot who hit 41, including 10 fours before being out with a few balls remaining. Captain Rob Dyer hit 91, but it was not enough to prevent PEPPARD STOKE ROW 3rds from losing a thriller by two wickets to BRADFIELD 2nds in Division 3.

Hugh Asquith and Dyer shared 78 for the first wicket, while there were useful middle-order contributions from U14 Daniel Watts and Allan May as Peppard Stoke Row looked set to post a competitive total.

Dyer missed out on a maiden century when he was caught by Richard Atkinson off the bowling of Harry Booker, ending an innings which included 15 boundaries and a maximum. Peppard Stoke Row finished their innings on 220-7.

Dyer had Craig North caught behind by Mark Lambert to make it 69-4, but Atkinson and Jonny Bray then shared an ultimately match-winning fifth-wicket partnership of 101.

Taylor Vines threatened to turn the game on its head with his left-arm spin, but Bradfield were ultimately able to scrape over the line with 6.3 overs in hand.