Sohi bags mammoth knock to lift side out of drop zone 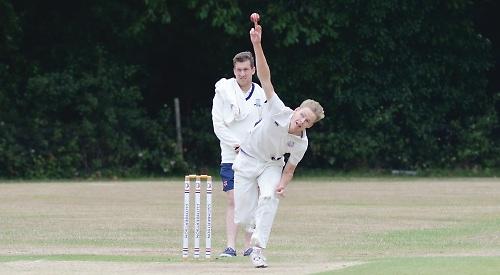 Batting first the hosts put on 263-5 declared after 49.4 overs with Nicholas Farr top scoring with an impressive innings of 119.

In reply Prakash Gurung top scored with 57 for the visitors whilst Will Legg put on 54 and Tom Oldershaw 48 as Henley put on 204-6 at the end of their allotted 50 overs to secure a share of the spoils.

KIDMORE END went down to a seven wicket defeat in their Division 2A encounter at NORTH MAIDENHEAD.

Kidmore skipper James Frost lost the toss and was invited to bat on a dusty pitch. When the new ball was hard runs flowed easily for batsmen Leach and Jeff Sheldon. The pair had been united early due to the loss of opener Hamish Grant who was the only wicket to fall to a seam bowler.

Leach and Sheldon put more than 70 runs on for the second wicket partnership. They both drove well, Sheldon with fluidity and Leach in a more punchy manner and looked comfortable until the spin pair of John and Ilyas came on. These two bowled 39 overs in tandem and took seven wickets for 146 runs.

Leach was caught for 40, Sheldon caught for 35, and Ashby swept well, but found timing difficult during his score of 45. The highlight of the Kidmore innings came from Duncan Grant, who combated the spin bowling with an unusual technique. He kept dropping to his knees making the ball come around to his chest height then played a pull shot to the ball as he scored 41 with thre sixes. The last over was finished off by Faroqi who struck a six off the last ball of the innings as Kidmore finished their innings on 223-9 after being on 151-5 with just 11 overs to go.

North Maidenhead started their innings in aggressive style and in a similar fashion to Kidmore End, the hosts lost an early wicket. Kidmore started with the old ball and spinner Taylor had Khan caught at deep midwicket by Duncan Grant.

Bukari then smashed 50 from 50 balls before a good catch by Hamish Grant off the bowling of Ashby removed him.

Shortly after this Taylor picked up his second wicket as Frost took a sharpe catch in the gulley. The score was 81-3 and the game was in the balance. However, ferocious hitting combined with circumspect blocking helped the hosts to keep the momentum of their batting going without too many risks.

It was only after the drinks break at 24 overs that the batting team hit the accelerator. With the light becoming a little gloomy as dark clouds gathered and the hitting of the ball becoming harder, Kidmore End missed a few difficult chances in the field.

John got a couple of lives in the field as he started to attack the bowling with relish and scored 71 not out from 66 balls with five fours and six sixes as the hosts ran out winners.

HENLEY 3rds comprehensively beat host side CHISWICK AND WHITTON 2nds in Division 5B.

Batting first Chiswick and Whitton struggled initially against the pace attack of Nick Johnson who took three wickets and Nigel Dunstan who beat the bat repeatedly but remained wicketless.

After the dismissal of the dangerous Suleman wickets fell regularly to Chris Johnson and Olly Gould and Chiswick and Whitton were dismissed for just 134 runs.

Henley got off to a shaky start with the loss of two early wickets but a patient half century from Nick Johnson well supported first by John Neville and then Hari Manaharan took them to the brink of victory. Aggressive batting from Alex Harris-White and Nigel Dunstan then secured the 25 points for Henley.

Elsewhere in the division WARGRAVE 2nds climbed out of the relegation zone thanks to a 169 run win at home to SLOUGH 4ths thanks to an impressive innings from Mandip Sohi.

Batting first the hosts put on 327-4 before declaring after 39 overs with opener Sohi top scoring with 156 whilst number two batsman Kam Hanif hit 84. In reply Slough were bowled out for 158 with Scott Morton taking 3-26.

KIDMORE END 2nds lost by four wickets to current Division 7A league leaders THEALE AND TILEHURST 2nds at Gallowstree Common, however with a substantial amount of bonus points they remain in joint second place and in contention for promotion.

Kidmore skipper Chris Pigden had won the toss and had little hesitation in choosing to bat on a flat batsmen-friendly pitch with the target of posting a substantial total. The match didn’t play out in that respect as Kidmore found themselves 10-1 in the fourth over with wily Theale seamer Mo Jamil cleaning bowling Pigden, Cameron Livingstone-Smith and Mark New then started to rebuild the innings before Jamil had Livingstone-Smith lbw for 25 with the score on 46.

Will Patey joined New and they added 57 for the third wicket before New was out for 35 lbw to Jamil and Kidmore were 93-3 in the 18th over. Kidmore’s innings then imploded in spectacular fashion as Brian Cooper’s off spin cleaned out the middle order with figures of 3-11 as the hosts collapsed to 107-7.

There was a further twist in the tail as Andrew Thomsen and Ajay Raina demonstrated what a good batting pitch it was as they added 50 for the eighth wicket before Raina was bowled by Mark Mason for 24 leaving Kidmore on 157-8 and short of a decent target and batting bonus points.

The 10th wicket provided a suitable tonic for the Kidmore innings as youngster Jack Livingstone-Smith and Thomsen added 48 runs and in the process Thomsen made 66 and was the last man out and with his dismissal Livingstone-Smith was 10 not out and Kidmore were in a decent position with 208 runs on the board.

Kidmore’s Thomsen grabbed the first Theale wicket as the visitors were 6-1. Micky Metha and Paul Robinson added 71 runs for the second wicket before Raina enticed Metha to hit a catch to Thomsen at deep mid-wicket.

Kidmore missed a couple of chances which could have aided their victory quest with Jamil being dropped on 10 and his 41 not out proved crucial in ensuring that Theale got over the line.

Persistent Kidmore bowling saw them pick up six wickets and with a bit of luck they could have run out winners but with such a good batting pitch and a quick outfield 208 was not enough runs and Theale duly won the match by four wickets in the 39th over.

Batting first the visitors were bowled out for 155 with Scott Talker taking 3-33. In reply Stephen Jeffrey hit 101 not out as Wargrave eased to 156-1 to claim victory.

Elsewhere in the division KIDMORE END 3rds eased to a nine-wicket win at home to COOKHAM DEAN 4ths.

The visitors were bowled out for just 50 runs in 17 overs before the hosts hit 53-1 to wrap up the low-scoring match.